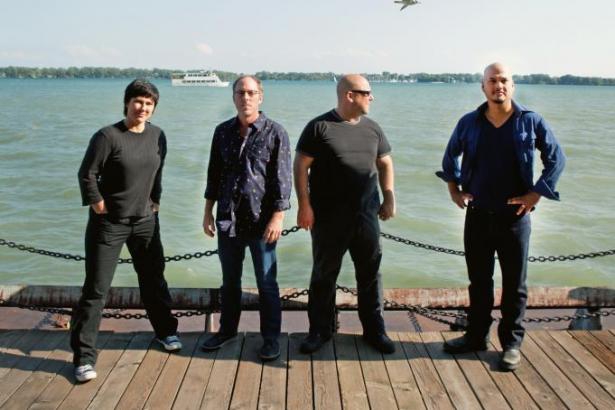 The PIXIES are an alternative rock band from Boston that generated  hits in the 80's and early 90's with records like Doolittle and Surfer Rosa. The late Kurt Cobain  was once a fan.

The bands' “Doolittle Tour” begins in Canada this month and arrives in  in Vancouver May 3.

WD: Your box set Minotaur was nominated for a Grammy award.

David Lovering: It's the second time we've been nominated for a Grammy. Maybe third time's the charm.

Vaughan Oliver, who was the artist on all our albums, put together a lot of the artwork and it was an impressive thing. I actually own the deluxe set. It's huge: you need a sherpa to deliver it. That's how huge it is.

It's fur-lined. The whole case is all fur, faux fur, and in it you've got every form of video posters and ads, music... so I thought that when we were nominated, it'd be a cinch to win. But it ended up losing, so what a kick in the pants. Like I say, I hope third time's the charm.

WD: But you know, being nominated in itself is like winning.

DL: Yes, I think it's very special. I still can't say enough about it. I'm not a sore loser (laughs).

WD: What prompted you to create the box set? How did that get started?

DL: A gentleman came up with a proposition of having something with all our material in a grand slam box set. We toyed around with the idea and then finally we all got on board and it actually happened. It was amazing.

WD: Your show is quite spectacular, with 11 films and a specially-designed light show. Can you talk a little about that?

DL: Doolittle (the album) was approaching its 20-year anniversary and people were telling us that it would be nice to put together some sort of show honoring that record.

A lot of people say it's a classic album. We were kind of biased. We think it's a great album, but we didn't know what the outside world thought of it (laughs).

We got several video directors who did their own interpretations of each song.

So while we're performing there's a video interpretation of the song playing behind us and it's kind of synced up. They're pretty wild and out there.

I can't see a lot of what's going on because my back is to it the whole time and I can't really turn around while I'm drumming (laughs). During the break, I can turn around and check it out.

There's also an amazing light show with visual lighting props hanging down. It's the biggest production we've ever taken out and it hopefully makes the whole show better.

WD: You're opening the show with (the film) Un Chien Andalou. That's quite a statement piece.

DL: Because of the song Debaser, the first track on Doolittle, has a reference to it, we're using it as a catalyst: something to start off the show.

We have excerpts from that and some really powerful pieces behind it.

WD: You've been getting rave reviews all over the world. What is the most unusual or surprising thing somebody has said?

DL: That's a tough one. I can't recall anything that's struck me.

WD: Do you have a favorite part of the show?

DL: I like the beginning and I like the end (laughs). It's more because some of my favorite songs we play at the beginning, like Tame and Manta Ray, and I love playing them because they're really fast and up there. The ending again, I love Gouge Away. I love the ending knowing we've done the Doolittle album because then we usually come back to the older songs from Surfer Rosa, Bossanova, or Trompe Le Monde.

WD: You were together for a long time and now again for a long stretch. Can you talk about how that's worked?

DL: We were together for five years initially where we put out five records. Like most bands we were dysfunctional, parted and went our own ways. Then in 2004 we got back together and it was like riding a bike: it was very easy.

When you're older and wiser and realize what your faults are it makes it easier for everybody else. So cognizant of that fact, I think that we're enjoying ourselves and we're watching our Ps and Qs. We've been very fortunate.

We've been together on this reunion tour since 2004 which is longer than we were together during our initial run back in the 80's and 90's and that's surprising because we haven't had any new material.

WD: For the Canadian leg of your tour, what city are you looking forward to the most?

DL: I'm going to say it would have to be the four cities we have not been to.

We've been to Vancouver a bunch of times, Montreal, Ottawa... but we've never been to Kitchener, Hamilton, Moncton, or Halifax.

Maybe I'd say Halifax. I grew up in Boston but was never able to get up there so it'll be a thrill for me the first time going to Halifax. That's probably the city I'll look forward to the most.

WD: You'll have to make some time for a lobster dinner while you're there.

DL: That's what I hear. I'm looking forward to Canada. It's one of my favorite countries. I always tell everybody I'd be a proud Canadian if I ever was one.

The PIXIES' Grammy nominated box set Minotaur contains all five of the band's albums on 24k gold-plated CDs, DVDs, and Blu-ray discs, a DVD and Blu-ray of the Pixies' 1991 performance at London's Brixton Academy, and an exquisite 54-page book of legendary designer Vaughn Oliver and photographer Simon Larbalestier's project artwork.

Bruce Hornsby and the Noise Makers Rock the River Rock