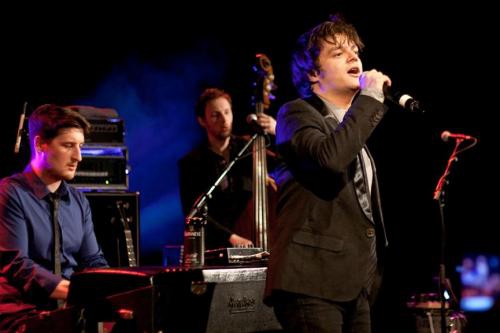 With the release of his new album, The Pursuit, Jamie Cullum and crew arrived in town on Saturday night for the sold out Vancouver stop of their North American tour.

The Commodore was bursting and anticipating the jazz singer-songwriter and multi-instrumentalist perform some of his best tracks and give us a taster of his brand new album. Cullum’s first album in four years is said to show maturity and new musical heights for the thirty year old.

According to Cullum, "It was the right time for me to take myself out of my comfort zone, and to push myself to be bolder. I wanted to build on the things I've already done, but I also wanted to reinvent myself.” After Saturday nights show, he proved just that.

With a Yamaha, grand piano taking up most of the stage, Jamie came from backstage with the rest of his band, Chris Hill (Bass), Brad Webb (Drums), Rory Simmons (Guitar/Trumpet), and Tom Richards (Saxophone/Percussion) to start the show perfectly with 'I’m All Over It,' full of punchy piano beats and sing-a-long chorus to get the crowd ready for the show ahead. Smoothly followed by his version of Rhianna’s 'Don’t Stop The Music' with hand slaps and taps on the piano frame and strums on the piano strings for a more acoustic and soulful version of the dance club original.

The covers didn’t stop there – Jamie Cullum experimented and made his own versions of Pharrell Williams ‘Frontin,’ and Ray Charles’ ‘I Got A Woman’ to interact with his audience and get them singing along which seemed to be high on Jamie’s list.

The whole performance went from strength to strength as Jamie’s powerful vocals blew us away whether it was big band, jazz classics, upbeat, dance songs or a stripped down, a cappella version of Cole Porter’s ‘I Get A Kick Out Of You’ with just Jamie and a double bass.

I never knew that a piano, a little bit of class and a whole lot of jazz would be the perfect entertainment for a Saturday night.

Just One Of those Things

Not While I’m Around

I Got A Woman  (Ray Charles cover)

These Are The Days

I Get A Kick Out of You (Cole Porter cover)

What A Difference A Day Makes

More photos from the show