Gomez Brings It On at the Orpheum Theatre 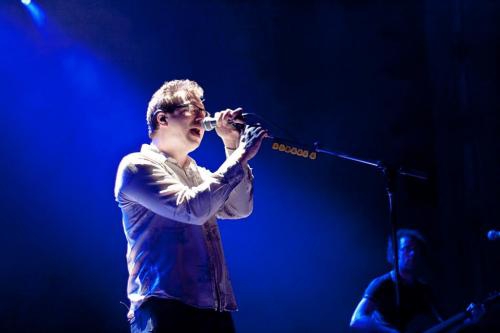 The Orpheum Theatre was a perfect venue for the British indie five-piece band Gomez whose musical journey started  in 1998 in England when their first album ‘Bring It On’ won the prestigious Mercury Music Prize.  It immediately put them on every record label's wanted list. Since those early days, Gomez has recorded six albums, toured all over the world, had songs featured on Grey’s Anatomy and House and signed with Dave Matthews' record label, ATO Records.

Their current US/Canadian tour saw them arrive in Vancouver  on Friday night to a very excited crowd as part of the 2010 Cultural Olympiad program. With the same band members from day one, singer/guitarist Ian Ball and Ben Ottewell, multi-instrumentalist Tom Gray, bassist Paul Blackburn and drummer Olly Peacock, these five gentlemen walked onto the stage and eased us into their music with ‘Tijuana Lady’ accompanied by Ben Ottewell’s soulful, husky vocals.

For a band that has been making music since 2008, the show had a perfect mix of classics and recent releases from every album of their back catalogue. From the upbeat ‘If I Ask You Nicely’ dripped with sweetness in the form of Tom Gray’s vocals, to the smart, get-off-drugs tale ‘Ruff Stuff’, to my personal favorite, ‘Whippin’ Picadilly’, Gomez's infectious beat made every muscle move.

After growing up in England listening to Gomez, it was refreshing to finally witness them live with colorful lighting, perfect sound and a gorgeous venue. The only thing I ask myself is what took me so long.

If I Ask You Nicely

Meet Me In The City

Bring Your Lovin’ Back Here

We Haven’t Turned Around