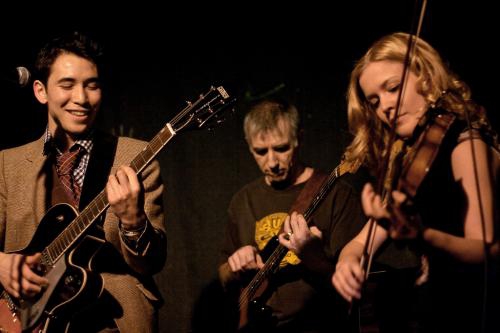 Every Day and All at Once is Jasper Sloan Yip's second album. The band includes  Mark Brichon on bass/banjo, Graham Serl on drums, Stephanie Chatman on violin and VO's very own John Tanner on keyboard. Versatile and dynamic, the five musicians fuse a warm sound that makes a winter day feel like summer. Recorded at Vertical Studios with help from Tom Dobrzanski who produced bands such as Said The Whale, Hey Ocean! and We Are The City, Every Day and All At Once is an album for all seasons.

When I first saw Jasper perform back in the summer of 2008 with his first EP, White Elephant, I knew I was witnessing a great talent. In those days he would grace the stage with only his trusted acoustic guitar and ukulele and with occasional help from Mark on banjo. Even then, you could see what a great guitarist and lyricist he was. But with a bit of time and a trip throughout Europe and he smacks you in the face in the form of album number two.

With the softened drumroll on 'Transit,' soulful guitar solos on 'Today' and reggae beats on 'Back and Forth and To and Fro', Jasper demonstrates just how much he has grown as a musician and songwriter. Besides getting hold of four talented band mates, Every Day… shows off  different musical styles and lyrics that are pure poetry. His voice has gained so much range and strength that he can blow an entire room away which is just what he did Saturday night during the encore.

Re-recorded and completely stripped down to his old roots of ukulele and banjo, 'Postcards' was one of the first songs I heard back in 2008 and now I was hearing it again as a powerful encore and an even better version of the original. With delicate strums and powerful vocals blasting and bouncing around the room, 'Postcards' was the perfect way to wrap up an awesome show and prove to us that this is going to be Jasper's best year.

Check out upcoming shows and listen to new tracks at http://www.myspace.com/jaspersloanyip

More photos from the show here