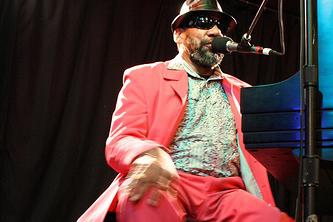 I was going to hear Blues and Jazz at the Patricia Hotel, 403 E. Hastings St. in Vancouver. The event was Jelly Roll Morton Making Vancouver Concert, hosted by Stephen Quinn of CBC Radio One's "On the Coast". Famous Jazz pianist Jelly Roll Morton actually lived at the Patricia Hotel in 1919, so there was some historical significance in having a Jazz & Blues concert there 61 years later. The musicians were Henry Butler, Ndidi Onukwulu, The James Danderfer Trio, Brass Roots, and C.R. Avery  playing Jelly Roll Morton tunes and some of their own inspired by his style of Jazz. Here's an account of the concert:

Hanging with my friends...

I listened to my friends talk about relationships and sex while they stood next to me in the lineup. The sound of cool New Orleans Jazz  intermingled with the conversation, then I realized it wasn't background music that I heard. I lifted myself up onto the divider separating those waiting and those watching from inside the venue. At the other end of the room I saw a black baby grand on a small stage. A man wearing a black leather hat and dark sunglasses was playing melodic jazz. I found myself bobbing my head in time with his playing. I felt transported to an imaginary bar in New Orleans.

The crowd was a mix that reflected the mixture of acts that were on tonight. Twenty-year-olds with their toques and skinny jeans sat next to the older men who looked like their names were etched on the bar seats. The layout of the pub, with it's many arches covered in beer signs, made it difficult to know how many people were there, but it felt like it was packed there was so much energy in the room.

Looking through the crowd while continuing to sit on the ledge, I noticed the interweave of people talking and the piano playing. It was Henry Butler from New Orleans playing at the piano.  Henry is a passionate pianist and the force of his playing slowly seduced the attention of the audience. The hum of conversations began to dim. One by one the audience became enraptured by his exploration of emotions and passion. Sometimes the song was forceful and passionate, while at other times it slowed down and became seductive and sensual. My ears were stimulated and attentive as I followed the story he told with his keys.

Whistles, cheers, and clapping erupted as Henry Butler rose from his piano. His first set was over. I noticed the walking stick and saw that he was blind.

I met  a few friends I hadn't  seen in years, so we went outside to talk.  C.R. Avery and musicians from Carnival and Brass Roots Band were there. Many of them apparently knew each other, so I asked to take photos of them together. I liked C.R Avery's style, which reflects his poetry. Cool, full of character, and a mix of human and emotion.

Smoke breaks for musicians. Everything settled down after a very long 15 minute set break.

The audience was quiet, no more idle chatter. The serious jazz lovers had stayed to witness Henry Butler work those keys.

Such passion, yet steady calm. He stamped his foot and I could feel it in the pub dance floor. The small stage shook  when Henry played and stomped and moved the melody along. The end of the song lifted the audience from a trance. Henry spoke  in a deep voice, one you'd expect from a man with his presence. He told  a story about a song and all I heard was: New Orleans, New York, Jazz, Blues, Gospel. The song's name was New Orleans Inspiration and I smiled, inspired.

Henry Butler looked straight ahead. His face barely moved as he concentrated on the music. The stage lights reflected off of his dark glasses. His left shoe stomped while his right shoe tapped. I imagined him marching in a New Orleans parade. I felt he was leading me along while carrying a marching baton instead of a walking stick. Marching along, the music built, the audience applauded, our applause rising with the music.