The urge to create compels artists to continue working even in the face of poverty and obscurity...why? 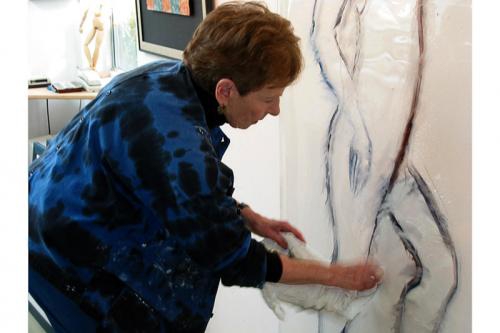 Is the need to create imprinted in the human genes? Otherwise, why would artists continue to make art while facing a life of poverty and few rewards? The  urge to create is a universal, compelling drive that has been evident since the dawn of civilization, its roots still explored and puzzled over by philosophers.

Imagine humans 35,000 years ago, dressed in animal skins, walking away from the bright sunshine deep into the darkness of a cave. They carry flaming torches that brighten the gloom and draw images of animals in motion on a stony wall. Their tools are simple: sticks, earth pigments of ochre and soot, their hands, perhaps pieces of bone and fur.  They draw what they know: antelopes, bison, leopards and other animals. The accuracy and beauty of their images is astounding, although they have not had the benefit of art schools or instruction of any kind.

As an artist, I am fascinated by the thought of the first human who picked up a black stick charred in the fire and marked on rough stone. Instinct? How could they draw such anatomically accurate animals without actually seeing them?  These drawings helped early humans to think symbolically, allowing them to hold the image of the antelope in mind while gazing at the lines drawn on the wall, and in this way connect the drawn lines with the living animal in their imagination. Today psychologists define this ability as working memory.

We also know that children are born with the ability to draw spontaneously, an ability that, unfortunately, is often lost later on.  It seems to me that the ability and drive to create what we now call ‘art’, has been with us since the beginnings of human consciousness, and has been expressed in an amazing variety of ways in different cultures. From the cave paintings, petroglyphs and prehistoric sculptures, to Sumerian and Egyptian monumental sculptures and architecture, from realistic rendering of animals to abstract symbolism, from storytelling murals and religious content to more modern abstraction, the range is absolutely mind-boggling.

In the ancient world, the concept of the artist and of personal expression did not exist. Artist were considered useful artisans, more like servants working for a master; usually Kings or the Church. Creators of what we now define as art were considered artisans, trained mainly as apprentices. Like other trades, painting and sculpting were hereditary and little or no attention was paid to artistic expression.

Only during the Renaissance, in the 15th C, do we see the rise of individual artists. In 1546, Giorgio Vasari, a Florentine artist, wrote The Lives of the Painters, Sculptors and Architects, mostly about fellow Florentines of the 13th – 15 C: Paolo Ucello, Leonardo da Vinci, Michelangelo, Raphael and many others. He discussed their careers and personalities in a way that left no doubt that  Great artists are great and important people.  This was a crucially new idea!  But even while artists were appreciated for their worth, they still depended on their patrons for survival.

In the 18th C, great patrons began to disappear, and at the same time artists began to develop their own styles.  In France, the visual arts exploded with painters like Courbet, Millet, Edouard Manet, Renoir and Claude Monet. Liberated from the obligation to produce work to order, these and other artists sought their own language and form of expression. It was the age of Art for Art’s sake.  Various ‘isms’ followed: impressionism, expressionism, symbolism, surrealism, etc.

Artists were also on their own, and had to find buyers for their work. Art for Art’s sake was a big shift for everyone involved. Artists’ insistence to be free of constraints in style and expression that patrons would impose stimulated artistic creativity and effort, and generated all the isms.  But it also made it harder to sell work, and to survive as an artist. Freedom of expression increases poverty among artists; they must actually make their living selling art. Monet wrote heartbreaking letters to his dealer, begging him to sell more work or just pay him so he could survive, and Gauguin wrote similarly to his dealer.  There’s a whole book of letters between Vincent Van Gough and his brother and sole supporter, Theo. But from then on, innovation and originality have remained very important, in spite of many struggles.

So here we are again.  Why do artists continue to create in the face of poverty and lack of recognition?

In my own case, I have been drawing since childhood, and made my first money selling my small pictures at school in grade 2. Making things was my favourite thing to do, and my dream was to be an artist. I immigrated to Israel at age 15, where life was difficult and money scarce, so I helped my parents by painting lampshades for children’s rooms and decorating wooden clocks. To me, becoming an artist was an impossible dream - - a luxury I couldn’t afford.