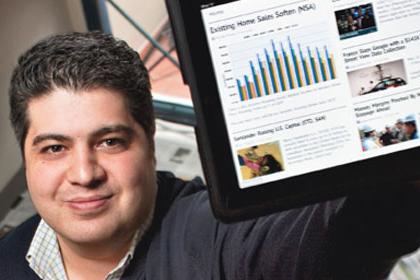 UBC law graduate Ali Davar and his colleagues at Zite are changing the way we read our news.

Zite. Say it aloud and it sounds like a sneeze. But Zite, the brainchild of two former UBC students, is changing how we get our news.

Until a few years ago, I started the day with the Globe and Mail, first on newsprint, later on my laptop and, most recently, on the iPad.

Zite, which is also available for the iPhone and HP's TouchPad, aggregates (or brings together) stories from a variety of sources. Since it was launched, it’s been downloaded hundreds of thousands of times, and was recently bought out by CNN.

It’s now the news source of choice for myself -- and hundreds of thousands of others -- for a number of reasons -- its simple, elegant and intuitive interface, its customizability, its range of content and its ability to surprise you.

It takes only a few minutes to get started with Zite. You set up a profile, and (optionally) let Zite know your Twitter, Google Reader and Delicious account information. If you do, Zite can build up a profile of your likes and dislikes to offer you more personalized news. Even if you avoid this step, you can still personalize your news by choosing from 35 categories -- such as Pets, Wine, Philosophy, Fashion, Gadgets or Sports -- or enter your own keywords.

Zite’s home page provides you with a list of five stories aggregated from around the web reflecting from your various categories. You can swipe the screen to scroll through more general stories or go to specific sections. But Zite’s real power comes once you open a story. You can give an individual story a thumbs up, meaning you’ll see more stories like it, or a thumbs down, so Zite will show you fewer similar stories. You can even block sources completely, or opt to see more stories from that particular publication or author. You can also share stories -- via Twitter, Facebook, email or other means. And when you do, Zite takes note of that as well and serves you similar stories in the future. 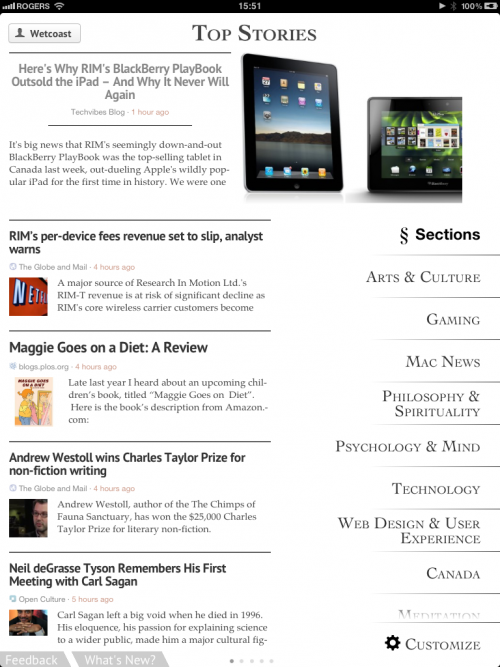 Sometimes Zite’s choices are odd. For example, why is Zite giving me a profile of a Vancouver lawyer from a site called mylawbid.com? But that’s part of what makes Zite so intriguing. Your news is tailored to your interests, but it also includes occasional stories that you would never have seen otherwise: an interview with British author Jenette Winterson, an article about the scarcity of fresh water around the world, a lighthearted piece about a curfew on cat cafes in Japan.

I use Zite to discover both the obvious and not-so-obvious stories about Vancouver, about Canada, about my areas of interest and my areas of research. Zite gives me content from major providers such as the Guardian and the New York Times and from obscure sources such as personal blogs -- stories I would never have found for myself but which are usually interesting and often useful.

Zite has had its share of controversy. Last year, 11 major content providers sent the company a cease and desist letter ordering it to stop what they called pervasive copyright infringement. The problem? Zite was pulling the stories onto its app without the surrounding ads. If enough Zite users get their content that way, the content providers believe, advertisers will stop placing ads on the original content sites.

Mark Johnson, Zite’s CEO, says the company is looking for ways to work with publishers. But, he argues, Zite actually helps publishers. “We’re sending users to stories they wouldn’t read otherwise,” he told the Observer.

Zite has deep Vancouver roots. Its creators, Ali Davar and Mike Klaas, were UBC students. A few years ago, they created a search engine plug-in called Worio that would show you more personalized, interesting results.