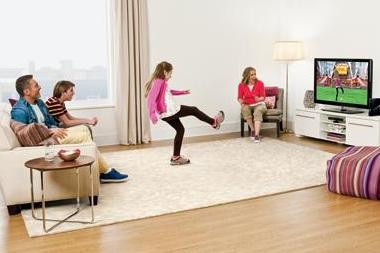 Microsoft's Kinect kicks some life into the video game industry, but will privacy pay the price? (Photo courtesy Microsoft Corp.)

You can buy into the future of video gaming for $149.99 (plus HST of course) at Best Buy. But be careful -- you may be buying more than you wish for.

I’m referring to Microsoft’s Kinect, which hooks up to the company’s Xbox game controller and allows the player to control the game with body movements alone. No controller, no joystick, just your own motion.

If you don’t already have an Xbox system, you can buy the Xbox and Kinect together for $399.99. Kinect ships with some games included, and Best Buy has others for sale at prices ranging from $39.99 to $69.99.

Kinect works through a combination of technologies that allow it to recognize motion, voice and image. It can differentiate between players and “remember” you the next time you play, even if you’re wearing different clothing. During a game session, the controller responds to your movements and voice commands. You wave and your avatar waves. You dance and it dances. You hit at a ball and your avatar hits the ball on the screen.

It’s not perfect. Kinect sometimes has difficulty differentiating individuals. There’s often a lag between your movements and the on-screen responses. And oh yes, if you live in a typical downtown Vancouver shoebox, you might have difficulties. According to the New York Times’s David Pogue, you need to stand at least six feet away, further if there’s more than one person playing.

I haven’t tried out Kinect myself, but the Times has a comprehensive review. What I’d like to discuss is what Kinect means to the future of consumer technology in general and video games in particular.

Like its predecessor, the Nintendo Wii, Microsoft’s Kinect brings console gaming (games played on dedicated machines that hooked up to television sets for output) to a wider audience. Previously, game controllers were complicated things, equipped with a bewildering variety of non-intuitive buttons and joysticks that required dedication to learn. Different games required different button sequences to jump, run, fight or whatever and each game had to be learned anew. Some games were incredibly complicated, requiring specific sequences of buttons to make particular moves.

Naturally, only those gamers with the time and incentive to learn arcane sequences such as b+2,2,uf+1+2,1, B! -- generally middle-class adolescent and young adult males -- were likely to buy and play console games.

With games costing millions of dollars to make, game manufacturers concentrated on the types of games those young males liked -- fighting games, war games, games based on professional sports. And as the kinds of games available became more predictable and targeted, the audience narrowed even further.

Until the Wii arrived in 2006, that is. The Wii made console gaming fun again. No longer did gamers have to memorize arcane button sequences. Instead of pressing R1-R3-L2 or whatever to swing your tennis racquet, all you had to do was hold the wireless controller and swing your arm like you were holding a real racquet. Suddenly families, fitness groups, senior centres and others were using the Wii to play virtual golf and tennis, to exercise and to dance.

And now the Kinect is taking that one step further by eliminating the controller entirely.

The initial games available for the Kinect show how far console gaming has come from the hardcore days of Halo and Dukem Nukem. There’s Dance Masters, Kinectimals (which allows you to interact with virtual animals), Biggest Loser Ultimate Workout, Kinect Sports and Kinect Dance Central. Yes, there are also games for the young male gamers -- Kinect Star Wars, Fighters Uncaged -- but the wider range of titles is a good sign for the future of console games. Combined with the proliferation of touch-operated games for tablet computers and smart phones, maybe there’s hope for video games yet.

Kinect may have broader implications as well. It brings various surveillance and artificial intelligence technologies to a consumer market at a lower price. The Kinect system recognizes your voice. It remembers your appearance. Right now those technologies are only being used to enhance the gaming experience, but it’s not too much of a stretch to extend those features to other uses such as home security and entertainment. As Ashlee Vance writes in the Times, “Kinect technology is intended to start in the living room, then creep over time throughout the home, office and garage into devices made by Microsoft and others. People will be able to wave at their computer and tell it to start a videoconference with Grandma or ask for a specific song on the home stereo.”

But Microsoft is not doing this out of altruism. Vance writes, "Microsoft has long salivated over the notion of controlling the living room." She enthuses about Kinect noticing that “you’re wearing a Dallas Cowboys jersey during a football game and switch the commentary to the voices of the Dallas announcers.” But if Kinect can do that, what’s to stop it from also sending that information about your clothing choices -- as well as your size, weight, skin colour, gender, living room décor and furniture -- to Microsoft through the internet-connected Xbox? Think of the commercial possibilities of that kind of information. I'm sure Microsoft would point to its various privacy policies and safeguards, but data has a way of getting out.