Just because something's on the internet doesn't make it true 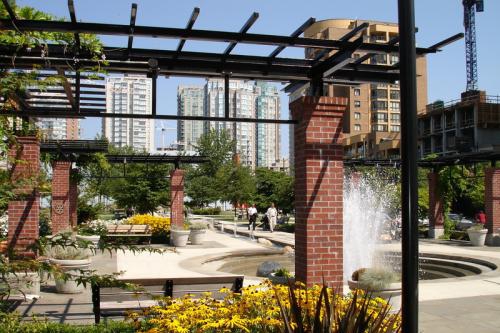 Are acorns in Emery Barnes Park toxic for dogs? You won't find out by searching the Web.

Vancouver Park Board Commissioner Constance Barnes is calling for the uprooting and relocation of young oak trees in Yaletown’s Emery Barnes Park. The reason? Dog owners in the neighbourhood are concerned their pets are getting sick from eating acorns and oak leaves. Supposedly, one area dog owner lost his two pooches because of toxicity complications after eating acorns.

Their evidence, according to Sandra Thomas in the Vancouver Courier: “According to information they (Yaletown dog owners) found on the Internet, acorns and oak leaves can be toxic to dogs, especially small breeds.… there are pages of Internet sites that claim they're also poisonous to dogs.” Thomas notes in the article that the American SPCA has a different opinion. “Dogs, however, generally do not forage on acorns as livestock do—and even if they do ingest several acorns, it is usually an acute (single) exposure, not a chronic situation,” the SPCA says at http://www.aspca.org/pet-care/ask-the-expert/ask-the-expert-poison-control/acorn.html.

Countering that is DogChannel.com where resident vet Jon Geller states that “Many people do not realize that acorns are toxic to dogs.… Dogs have been poisoned by drinking water that oak leaves have soaked in. Two Chihuahua puppies were seen chewing on a couple of acorns. They developed a bloody diarrhea and their kidney values became markedly elevated. In spite of emergency treatment, they died of renal failure.”

Which site should you believe? The Internet is not a unified, authoritarian body of knowledge. It’s a wild and wonderful anarchic mix of fact, innuendo, opinion and gossip. Anyone can create a webpage and post whatever rubbish, truth or opinion they wish. Anyone can contribute to an existing discussion. Medical and veterinary data is especially open to interpretation. Anyone can find something they agree with on the web, link to it and call it an authoritative source. The question is, should the Vancouver Park Board make a decision to spend public money and staff resources on tree removal based on a Google search? Of course not.

Just because you read it on the Internet, doesn’t make it true.

Speaking of parks, Metro Vancouver has released a free iPhone/iPad app called iParks Explorer. I wish I could like it, but it’s disappointing for three reasons.

First, it’s supposed to encourage visitors to visit our regional parks, but is a tourist likely to know (or care) that Pacific Spirit is a regional park and is available on the app while Stanley Park is a City of Vancouver park and is not? If I were an iPod-equipped tourist, I would probably be looking for information on Stanley Park, Van Dusen Gardens, the Bloedel Floral Conservatory and the like with this app and feeling very frustrated because these attractions aren't listed, since they fall under the Vancouver Park Board jurisdiction. It would have been better if Metro could have coordinated with the Vancouver Park Board and other local municipalities to produce an app that features all area parks.

Second, the interface isn't intuitive. If you select “Parks” on the menu, you’ll see a list of the regional parks, and a row of icons indicating hiking and biking trails, public transportation and so on. The user of the app expects (at least I did) that pressing one of these icons will bring up say, a map of hiking trails or information on how to get to the park by transit. But the icons are not interactive. Tap the map button as often as like, a map of the park is not going to pop up. 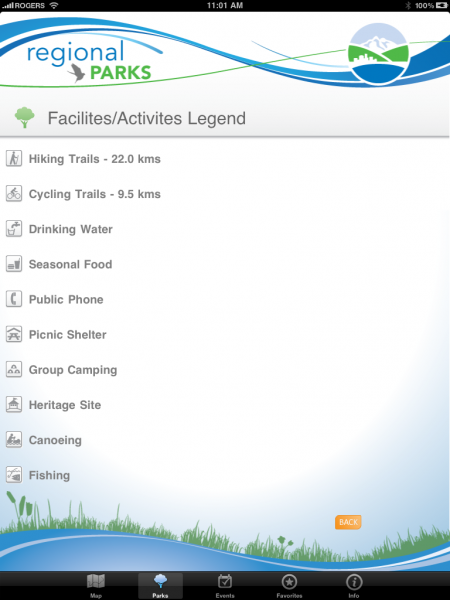 Third, there are spelling errors Each park has a “Facilities/Activities” page, but it’s spelled “Facilites/Activites”. If the spelling is sloppy, you have to wonder what else in the app might be inaccurate.

iParks Explorer does have useful features, such as park alerts, maps and events and it has the potential to be even better. Adding local municipal (and provincial) parks, making the icons interactive and carefully proofreading the app would make iParks Explorer a very useful app for tourists and locals alike.