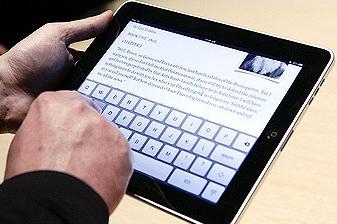 Contrary to rumour, you can write, edit, crunch numbers and do lots of other productive things on the iPad.

When Apple introduced the iPad earlier this year, many critics dismissed it as a "consumption device". The iPad, they said, was good for passive consumption of media -- Youtube videos, games, ebooks, music, movies and television shows. But it couldn't be used as a creative device, the critics said. They were wrong.

I've been using my iPad for over a month now. I'm writing this column on it right now. I've created artwork (not very good, but that's my lack of talent, not the limitations of the iPad), I've retouched photos, I've uploaded content to Wordpress blogs, I've diagnosed and fixed problems on desktop computers remotely, and tweaked websites. And a lot more.

Yes, I've also read books, laughed at silly cat videos on Youtube, listened to podcasts and music and played games. The iPad is great for all that. But it's also a useful, productive tool. As a bonus, even when using it for work, it's a joy to use, thanks to its touchscreen, its elegant design, its responsiveness and its sumptuous display.

It's fascinating to watch how iPad app developers are finding imaginative ways to take advantage of the device's features and limitations. Every day, new apps are introduced that allow you to work--and play--in ingenious ways. There are limitations, of course. You can't have more than one app going at once; Flash doesn't work, which means you end up staring at a blank screen on many websites; transferring files to and from the iPad can be difficult since there's no USB port; typing for long periods of time can be frustrating and even painful without an external keyboard. But even these limitations have workarounds.

There are lots of iPad apps out there. Over the next couple of weeks, I'll review some of them. This week, I'll focus on so-called "productive" apps. Next time we'll look at some more recreational apps. And remember, new apps are added every day, so treat this list as a rough guide, not the definitive word.

Despite the lack of a physical keyboard, the iPad has spawned a number of writing apps. Whether you just want to jot down simple notes and reminders or compose a full-length novel, you can find an app that will suit your needs. After trying several, I've settled on Simplenote, PaperDesk and Pages.

SimpleNote (free) is well named. It's perfect for short notes and reminders. What I like about it best is that it can automatically sync with several desktop note programs for both PCs and Macs. Jot down a note on your iPad and the next time you open your desktop or laptop machine your note will be there. 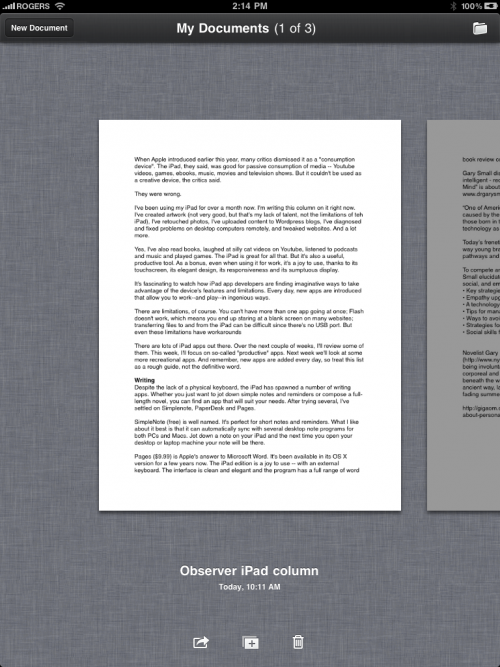 Pages ($9.99) is Apple's answer to Microsoft Word. It's been available in its OS X version for a few years now. The iPad edition is a joy to use. The interface is clean and elegant and the program has a full range of word processing functions -- you can format pages, add columns, spell-check, align text, apply styles, and so on. I'm writing this column using Pages. The only drawbacks are that it's convoluted to transfer files back and forth between your iPad and other computers and that you can't print directly from the program. There are workarounds for both of these though, thanks to the ingenuity of third-party app developers. See below.

PaperDesk (free for the light version, $1.99 for the full version), like Simplenote, is basically a program that lets you write notes. But its added features -- you can record audio and/or draw sketches while writing -- make it worth the $1.99 price. The lite version limits you to three pages per note. The full version removes this limitation and also allows you to sync with a PaperDesk web account and download PDF versions of your notes.

A word of warning -- if you're serious about using your iPad to write, invest in either a Bluetooth keyboard or Apple's own combination iPad stand and keyboard ($79.00). Typing for sustained periods of time on the iPad virtual keyboard is not fun and can even be painful.