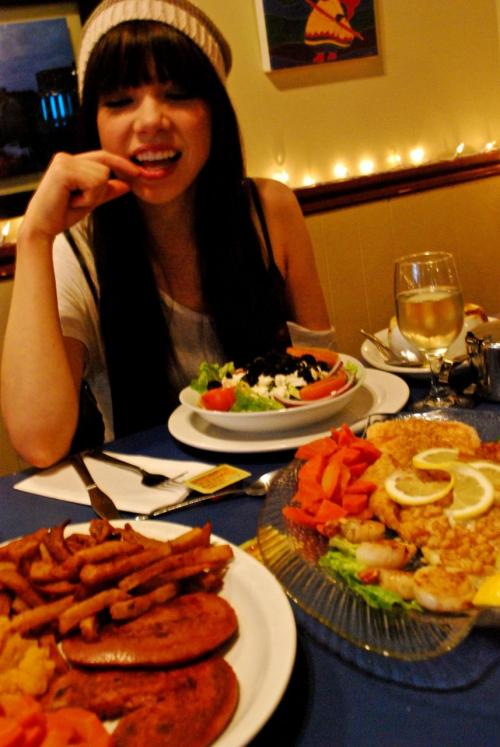 In the blowing, snowing streets of St. Johns, we ventured to Velma's Restaurant and Lounge where the locals told us we could find traditional Newfoundland food.  We had the good fortune to meet up with Juno nominee Carly Rae Jepsen and her father. Together, we dove into a seafood platter, fried bologna and cod tongues, while talking about the upcoming awards ceremony.

Carly Rae is a real hometown girl, born and raised in Mission, BC and transplanted to the fair city of Vancouver.  Many people will recognize Carly Rae from her stint on Canadian Idol. But that was 2007, after all, and her smash hit "Bucket" has since saturated mainstream radio. Her latest album Tug of War is making major headway, and having toured with Marianna's Trench, going so far as to collaborate with lead singer Josh Ramsay on the single "Sour Candy",  Carly Rae is gaining experience and notoriety in the music industry.

The Vancouver Observer's Junos team got to spend the whole evening with the girl next door, and even picked up classic composition Juno nominee Rob Teehan along the way for a drink at O'Reilly's pub.  From her first crush to her latest hair color, Carly Rae gave us the skinny on her charmed life. She will be presenting and hopefully receiving awards on Sunday night at the Junos. 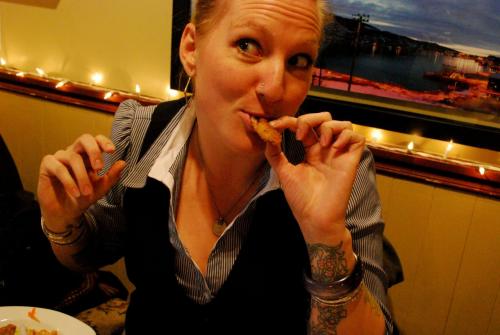 VO: You write most of your own songs, what's your creative process?
Usually I get one line and I work off that.

I'm always scribbling down ideas as I go. But usually it's the melody and the words together, but not the entire song.  I have songs that I haven't completed that in another few years will come back to me, and it's not that I'm wrestling with it every day but nothing's come, so I'll put it in the song library.

Sometimes it can be really quick.  I've written songs in half an hour.  But that's pretty rare.

VO: Your hit "Bucket" incorporates a rather obscure children's song. Where did that come from?
It was a last minute idea.  We were looking for a bridge. I actually co-wrote that song with my producer Ryan Stewart and our main goal was creating a summer feel-good, happy, forget-what-you're-supposed-to-do-and-go-to-the-beach  sort of feeling.  And I think that's always combined with childhood and lovely summer memories. So, when we were jamming out and trying to come up with a bridge, I started singing it as a joke and we were, like, can we get away with that?

VO: You're nominated for best new artist and best songwriter, which is pretty special.  How does that feel?
It's kind of still blowing my mind.

VO: Your bio mentions that your musical influences are Ella Fitzgerald and Van Morrison.  How do those influences come out in the way you write music?
I just love Ella Fitzgerald because to me she is the ultimate voice...if I could trade, I would want her voice.  To me, there's just so much behind every word she says. I'm captivated.  Van Morrison is childhood music I grew up with. He was definitely one of those main artists for me, so I don't think you can help but be influenced by that type of organic, sincere-type of writing.

VO: There's a beautiful monastery in your hometown. Have you been?
Are you kidding? My mom actually lived right on the bottom mountain, so my brother and I would hike up there, run around, play soccer in the fields.

VO: How was your transition from Mission to Vancouver?
It was a really natural transition, because I had a medium break in between.

I went to the Canadian College of Performing Arts right after highschool, and that was in Victoria so it wasn't quite the city. It still had that hometown feel to it, but was enough of a branch-out that I knew that I wanted more.

When I went to the city after school I met a bunch of different musicians and formed a swing band and, all of a sudden, kind of fell in love.  It was the most exciting thing. I'll never regret it.

VO: How would you compare the vibe of Vancouver to that of St. Johns?
So far it's snowing here, which we get very rarely, so that whole vibe has thrown me off. I feel like I'm very far away and it's sunny in Vancouver right now. It  kind of reminds me more of Mission, for that hometown vibe.  I'm so excited to party here, because I feel like I'll get to know familiar  faces, that it'll be one of those things where you're running into people and you're only here a week and you feel like you kind of belong.

I'm definitely looking forward to all that.

VO: You were recently on E-Talk getting some glamour work done on your hair.  Do you feel pressure in this industry to look a certain way?
The lovely thing about things like E-Talk and having a group of people behind me, is that I really don't have to worry about being glamorous because everyone else is worried about it for me.

I got to show up with my not-dyed hair and they just pampered me and made everything fall into place.  I definitely am from Mission in the fact that I don't worry about things as much as I should, such as how to do my hair.  They were giving me tips and I have no idea what to do with this.

What is this product and why are you sticking this sticky stuff in my hair? They were laughing at me, but I think I'm gonna get better at it.  The more I become girly, the more deep into it I can get, I've realized.  It's just a bad stream...then there's nails, I don't even wanna show mine.

VO: What was touring with Marianna's Trench like?
I tour with a bunch of boys so if anything, the music business and has shown me more how to be a man, more than how to be a girl.  But they are great guys.  Josh and Amanda (Josh's girlfriend) are like my family in Vancouver. You know, those friends who take care of you when you're sick?

It wasn't like that the first time I toured with him, he was more like this musician that I looked up to and had written this one song with, but never really got to know.  I've been so lucky that I have had that experience now because he's amazing, so talented.

VO: What are your plans for this year?
Album number 2.  We've started it already, but I'm also going to Japan in May.  I just recently got a deal over there, so it's gonna be kind of exciting, I've never been to Japan and never thought I would go.  It's one of those life surprises.  Worst case secenario, I get to go shopping in Japan.