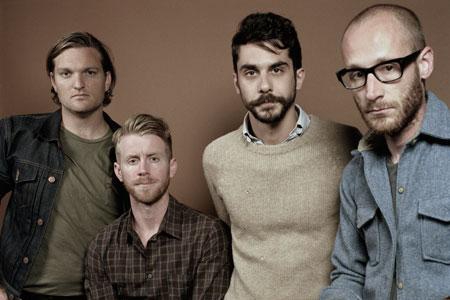 Cold War Kids Mine is Yours promotional shot.

Cold War Kids are about to start the North American leg of their most recent tour, in support of their new LP Mine is Yours.

Maybe fans of the band formerly known as The White Stripes will need to get their rock 'n' roll fix when CWK land at the Vogue on March 5th 2011.

Some critics have been especially tough on Cold War Kids, some negative attention due to controversy related to the band's religiousness. This recalls the case of Boards of Canada, a Scottish electronic music duo that has been accused of religious brainwashing through cryptic messages in their music.

Religious messages aside, how can you not love these guys? Cold War Kids' lyrics are sentimental and authentically human. Their hooks are easy to dance to and largely "feel good".

Mine is Yours may be considerably more radio-friendly than its predecessors, but the band's creative touch still resonates.

If you are not able to make it to the Vogue, don't despair-- Cold War Kids are booked for both Coachella 2011 and the 2011 Sasquatch! Music Festival. However, the Vancouver show is sure to be more intimate.