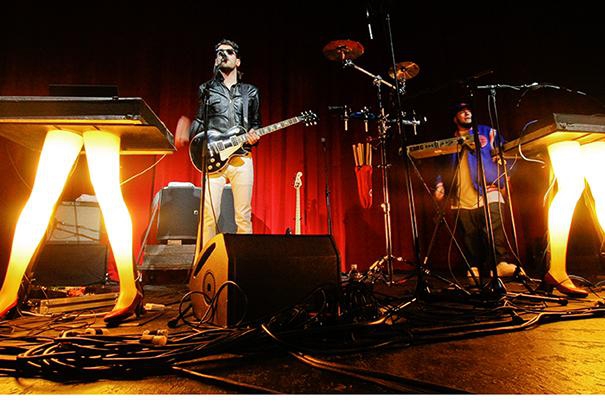 A Creative Commons photo of Chromeo by Caesar Sebastian. Yes, those illuminated legs are keyboard stands.

Chromeo, the smash hit electrofunk duo from Montréal is coming to Vancouver for their Risky Business Tour on February 10th, 2011. However, tickets are already sold out for the Commodore Ballroom performance! As a result, a second Commodore show has been added on the following night, February 11th, 2011.

Dave "Dave 1" Malkovitch derived his stage name from the graffiti pseudonym he used as a kid. P-Thugg is a nickname Patrick Gemayel "got somewhere around high school or college. It came from a Mobb Deep lyric that someone blurted out one day."

Listen closely and you'll hear Chromeo really does have a lot in common with the classic pop duo, Daryl Hall and John Oates.

Chromeo has actually played Bonnaroo with Daryl Hall and have appeared on the television series Live from Daryl's House. The result of the collaboration is fantastic.

Playing Lollapalooza twice was their most enjoyable festival experience, but they can't wait to play Coachella again.

If Dave was stuck on an island with only one synthesizer on a desert isle, it would probably be a Sequential Circuits Prophet-5.

In Dave 1's words, being on The Late Show with David Letterman was "fantastic; one of the highlights of our musical careers, and the fact that Bill Clinton was on the show with us is just another reason to tell the story to our grandchildren."

P-Thugg remembers it a bit differently: "that was crazy, it was kind of nerve racking, but everything worked out in the end. The actual studio was freezing so it was really hard, but the whole day was a really fun experience."

Dave 1: "I love hipsters, and can actually get annoyed when people criticize them. What would you rather have instead, every guy as a frat dude and every girl wearing Ugg boots? Hipsters are trust fund kids with a lot of money to support independent artists. They support local ma and pa vintage stores compared to Macy's and Holt Renfrew; they dress well although it may be a little heavy-handed sometimes. I thank hipsters, I'm buying my parents a house thanks to them! Everybody growing up had to give themselves a style."

P-Thugg: "Everybody has their own. People complain about hipsters, but hipsters are the first ones to have the balls to wear boat shoes, bring back Ray-Bans and set styles. As much as they can be annoying, they have courage; they have a role in society."

Remix culture also has a role in society, according to P-Thugg:

"It puts music like ours in the hands of DJs around the world to making it accessible in a dance floor setting. Our versions are more single or album oriented, not as dance-floor-friendly. It also widens the range of audiences for musicians. I like most of the remixes that people do for our songs, but one that has stuck over the years is the 'Bonafied Lovin (Yusek Remix)'."

Speaking of mixes, Chromeo was honoured to create a DJ-Kicks album. Dave claims, "We were marginal hip hop kids who didn't know anything about a Roland 808. The fact that they let us subvert it into a funk compilation is awesome. Some sort of German guilt maybe?"

When asked how he feels about Barbara Streisand, P-Thugg answered, "The person or the song? I like both of them."