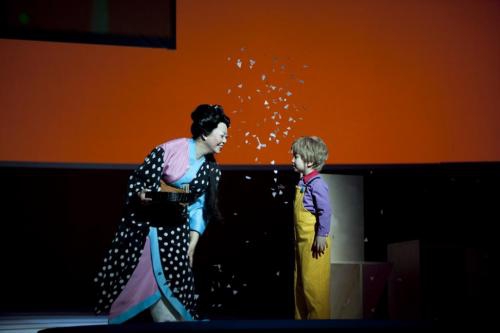 There is nothing more mysterious and beautiful than a butterfly. Inviting to captors for their colours and grace, some tragically end up in a display case.

James Valenti plays Benjamin Franklin Pinkerton's "convenient creed[s]" are a messy conflict waiting to happen. Pinkerton, the most irresponsible lover you are likely to see on stage, touches the heart and soul of Mihoko Kinoshita as Cio-Cio-San (Butterly). An appearance by Andrew Stewart as Bonze, a priest and Butterfly's Uncle is short but notable for the fear it invokes. It may have been a combination of the score and lighting, but Stewart deserves kudos for his work.

Butterfly's characteristically cute misunderstanding of the North American divorce system surfaces when she fantasizes that a man who is bored with marriage is sent to jail by a serious judge. Later in the opera, we are sung the heartbreaking imagery of Cio-Cio-San's tears being the source of water with which she fills her house upon Pinkerton's return from America.

The character of Butterfly is so submissive, while that of B.F. Pinkerton is so misogynistic. Cio-Cio-San was aware that some people in America pin butterflies to a display case. Pinkerton responds "It is so they cannot get away".

Puccini's splendid score, at times, creates the effect of traveling across rolling plains, while loosely mimicking Oriental five-tone scales. Yet it still manages to inject melodic signatures such as from The Star-Spangled Banner under smooth recitatives. The polyphonic harmonies of Butterfly's female relatives are emotionally fulfilling, alike much of the opera's divine music. The acoustics at Queen Elizabeth Theatre are fabulous, even if you are tucked away in a corner.

The show's set and costumes reference Art Deco, De Stijl and a fellow opera-goer sensed the influence of German artist Paul Klee. Pinkerton's first jacket actually looked like something out of the 90's television show 'Saved By The Bell'. At one point, large panels with projected images took on the faces of giant Rubik's cubes. So many gorgeous colours within this minimalistic paradigm. A silhouetted kiss behind the scrim is much more effective than it could have been in plain view.

The performance entails the 5th revision of a story originally by American lawyer John Luther Long (the first version babbled on too much). Both music and script are dramatic and not melodramatic until perhaps the finale.

Madama Butterfly is an emotional journey you do not want to miss. There are two more shows scheduled: One on Tuesday June 8th and Thursday June 10th. Roaring applause met our cast, but standing ovation was saved just for the title character, Mihoko Kinoshita. 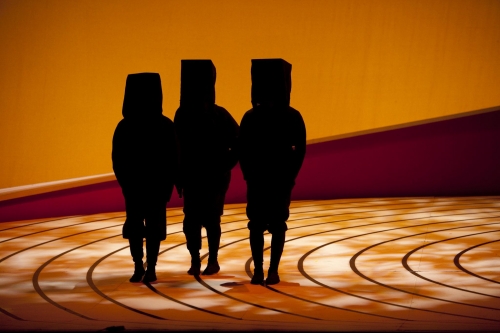