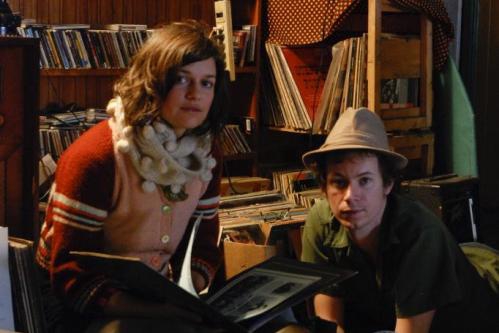 Miss Emily Brown and Corwin Fox caught in a promo shot for their new album: 'All of My Lakes Lay Frozen Over'.

Morlove kicked-off their Mainland cross Canadian tour at Little Mountain Gallery around the corner from Main Street on East 26th Avenue. Morlove, a new project, is Corwin Fox and Miss Emily Brown. Corwin owns a studio in Cumberland, and in Fox's opinion, a cross Canadian tour is the best way to seed their recordings.

"Recordings are two-dimensional, but a live performance is four-dimensional because you experience the music in a space along with the artists' personality and feelings. You can sense the background of each song, even if the performer doesn't introduce the song with verbal context". Fox also wants to have fun, he says, adding that it's been a long time since he's been to Halifax.

The duo has been preparing themselves for their upcoming events by hanging out for a week or so, "singing a lot of songs". Emily recently concluded a long solo tour, so she spent a good two days straight swinging in a hammock (so much she still feels like she is swinging).

Cheryl MacKay of CBC Radio One's North By Northwest has acted as a great supporter of Morlove. The Morlove album was recorded on a Canada Council for the Arts Grant, which has now been canned. Fox would love to hear a one hour special of the historic albums recorded on this grant-- maybe then people would realize how valuable the grant was to our culture.

When in Vancouver, Miss Emily Brown frequents Main Street's Sweet Revenge, a dessert place for "small people with big appetites". She gets the 'Smooth Operator', a layered cake with fruit and other goodness.

Corwin Fox played a show with Behind Sapphire, the subject of last week's album review, less than a month ago, on Vancouver Island. It demonstrates what a tight musical community we have in BC since their relationship was only discovered through this interview.