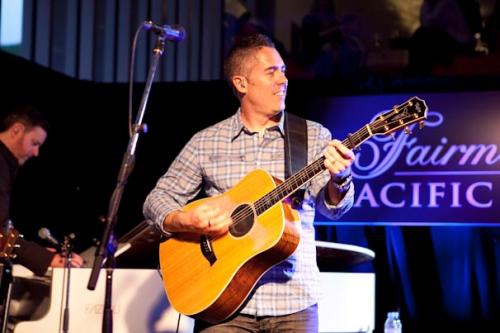 Barenaked Ladies kicked off the North American tour for their new album 'All In Good Time' at the Fairmont Pacific Rim Hotel Wednesday April 7th.

I was lucky to be invited to this small, exclusive concert, and even luckier to get a chance to talk to the band.

After helping myself to a "Million Dollar Martini" (named after the BNL's popular song 'If I Had A Million Dollars'-- drinks were free) I quietly situated myself by the abnormally large fireplace (about 4 metres long by 1.5 metres tall) and listened to the opening entertainment while snacking on unbelievable hors d'oeuvres.

Pianist and vocalist Bryant Olender soothed and swayed the audience with Tom Colclough on tenor sax and soprano clarinet. The duo was playing upbeat lounge jazz along the lines of Colin James or Michael Bublé. The signature $225 000 white Fazioli piano sounded so warm and clear it was as if someone plugged an audio cable right into the acoustic instrument. Smooth transitions from ragtime to Elton John's 'Rocketman' signalled their musical expertise. Bryant Olender said "the Fazioli is the most beautiful piano he has ever played on...your hands melt into it; like playing silk."

This night was taking place because of a partnership between EMI Music and Fairmont Pacific Rim. The Lobby Lounge is Vancouver's newest live entertainment venue. Every week, Mondays through Saturdays, live music starts at 5:00pm.

Barenaked Ladies started the show with their cover of Bruce Cockburn's 'Lovers In A Dangerous Time.' The sweeping fluidity of BNL's playing was apparent from the very beginning. And man, these guys are so funny! Ed Robertson spontaneously went into rap, rhyming "Rim" with "Jim" (Jim Creeggan is the bass player from the band), stating "here in Vancouver they like to smoke vicious" and later explaining "sometimes when you're making stuff up the only rhyme is "your balls." Proceeding to make overt jokes about being nude in the steam room, the "Ladies" launched into their hit 'Pinch Me'. Even with Stephen Page gone it really did sound like the band I grew up hearing on the radio.

Before starting 'It's All Been Done', Ed Robertson noted "That guitar solo is available in your room if you touch #7 on your phone." Their most unique new song called 'Four Seconds' had the kind of cool "gypsy punk" feel as Gogol Bordello from the Lower East Side of New York City. I asked drummer Tyler Stewart after the show how the song evolved in such a direction and he said "the samples in the demo had sort of a Serbian beer hall hip hop mishmash vibe".

I asked Jim Creeggan how well the band has managed to deal with changes in consumer habits and he shared,

"It is hard to gauge if we have been earning less or more than in previous years. We have a lot of live sales from our constant fanbase. Any money we lost from downloading may have been filtered into merch sales or through our fanclubs. Either way it doesn't hurt that bad." 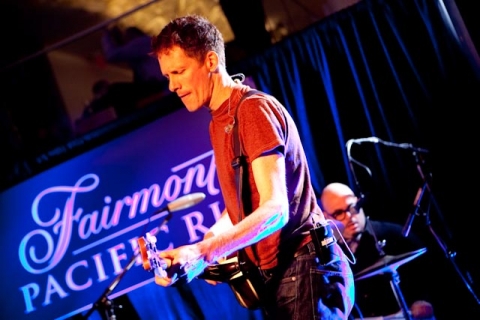 Barenaked Ladies are a world class Canadian act. They gained much attention after performing a short clip on Speaker's Corner, a television show in Toronto, in 1990. They were in Vancouver after performing in Victoria the previous night. For the remainder of the tour, Nova Scotian Joel Plaskett will be opening for BNL.