Brickhouse Rocks the House Every Thursday at the Fairview Pub 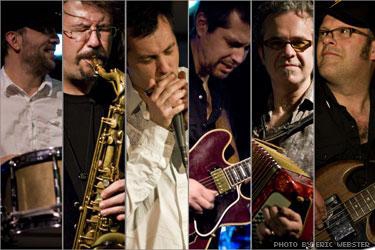 Brickhouse: A band who controls the emotion in the room.

Last Thursday I went to the Fairview Pub to play some pool, drink a
beer and groove to Brickhouse fronted by Rob Bracken. If you are from
Vancouver, you may already know Brickhouse. If you are curious why you
should care about a band with a name like a building, they are funky,
soulful and reflective six-piece R&B act shining at the Fairview (on
Broadway) every Thursday at 10pm. The crowd Brickhouse attracts is
calm and happy but definitely know how to party.

Back to Brickhouse. Before the set began I took a good look around: A
loving kiss; a knowing smile; pretty romantic. On the first beat,
people began dancing! I thought to myself, "These guys really control
the emotion of the entire room". I could feel that joy one is intended
to attain by singing or hearing the Blues. Brickhouse does not prepare
an individual setlist for each night; Bracken explains, "We play a
couple good tunes at the beginning, take the audience's temperature
and go from there". I could hear a sprinkle of Brian Setzer (Jump,
Jive an' Wail) in the performance. The sound of Brickhouse is in the
same league as Robbie Williams, Maroon 5 and Rob Thomas but with
superior lead vocals. Bracken was smiling as if he was thinking of a
special someone during his smooth lyrical stories. Strong backup
vocals contented me because a single poor backup vocalist can often
break a band. Carlos Santana-influenced guitar solos also brought a
smile to my face.

The singer and bassist Ray Keesh have been playing together for seven
years. Bracken has been on the Vancouver music scene for a long, long,
long time. Drummer Johnny Edson became the newest member of the band when he joined four years ago. The band does not frequent open jams anymore. Bracken considers playing unpaid gigs valuable for starting musicians but when Brickhouse has a day off, in Bracken's words he would "rather do something like climb the Grouse Grind". Between playing five nights per week and often appearing for others as special guests, Brickhouse is pretty booked. The band travels to events like the recent Pender Harbour Jazz Fesival (September 18th-20th).

Brickhouse has a substantial, independently-operated fan club:
(http://www.brickhousethefanclub.com). I questioned Bracken regarding
if any fans are crazy for the band like the Flight of the Conchords
fanatical admirer, Mel, and the answer is 'affirmative' (refer to
Robots - The Flight of the Conchords, 2008). However, Brickhouse
accepts this attention with open arms. The Brickhouse experience is
inclusive not exclusive, which means all ages, race and religions are
welcome to the party

These guys never get boring! Maybe this is why they are currently in
talks with Hockey Canada for some possible Olympic involvement:
Bracken alluded to 14 hours per day in a tent on the soccer fields
downtown near Terminal Station. False endings allow for complete
silence before they jump back into the groove one last time (followed
by massive applause).

Whether or not you have got the blues or the rhythm, make it your
mandate to experience some soulful R&B on your next available Thursday
evening.