Eyjafjallajökull on May 16, 2010. Volcano photos by Örn Óskarsson.

To Icelanders, volcanos are old hat. A friend's dad in his fifties told me that Iceland had experienced something like 18 eruptions over his lifetime so far, many of which he witnessed first hand. With all that fire and brimstone, I'm surprised Icelanders haven't become an island of volcano worshippers. You might think that growing up so close to geological havoc gives a nation a certain resilience. Or would it be a constant terror?

Either way, Icelanders are fascinated by their current tongue twister of a volcano, and you don't need to go far in this town to see it. Eyjafjallajökull has its own live webcams, viral videos on YouTube, and even a song written about it. Not to mention that there's volcano-themed art all over Reykjavík (see photo below). About a month after the eruption began, Eyjafjallajökull's influence is apparent.

Soon after the Eyjafjallajökull eruption began, I walked around a sunny, ash-free Reykjavík and asked three Icelanders from different walks of life how the country's volcanic nature shapes its inhabitants.

María Einardóttir, who has worked for 34 years at a hot dog stand widely regarded as the best in Reykjavík, told me that in the city she feels removed from the volcano and doesn't fear it. Her customers aren't scared either, but everyone is abuzz about Eyjafjallajökull and feels for the farmers who have been affected, "because it’s very difficult for them," she said.

I asked María if she felt Icelandic people are a little bit stronger because they've had to deal with geological unpredictability over history. "Yes, I think so," she told me, and then corrected herself, "No, this is not 'think so.' I know it is, because they have lived it from birth until they die." Icelanders know that anything can happen here, she said as she gave me a free hot dog.

Others feel a little more cautious, however. When I asked Valdimar Tómasson, a frequent customer of María's hot dog stand and a self-proclaimed "depressed and drinking poet," whether he had seen the eruption in person, he said, "I’m not so stupid. It’s just stupid foreigners and stupid people who are playing with these terrible things." It's enough for him to read about it in the news, he told me.

Valdimar was born in Vík, a town just south of Katla, a “very dangerous volcano," which has influenced his feelings about volcanos. "This power is so strong that I don’t like to play with it," he said. Unfortunately, he would have to go near the volcano tomorrow for his father’s sake, to help a sheep give birth, he told me.

The eruption, he says, "can be terrible for people who live nearest to it. For the farms." Many people in Reykjavík "don’t really understand the dangers."

Kristín Gudmundsdóttir, a young woman working at the hip shop, Kisan, on Reykjavík's main shopping street, told me that for her life in Reykjavík continues as usual, except that over the past week many of her customers have been stranded travellers whose stopovers in Iceland have been extended indefinitely. But it wasn't necessarily a terrible thing. "I think it was a little bit of an adventure to them," she said.

On how volcanos affect the Icelandic attitude, Kristín said, "I think we’re always prepared for anything." Since scientists were able to predict it to some extent, "it wasn’t really a big surprise that the eruption came true," she said.

However, Eyjafjallajökull threw a monkey wrench into public sentiments that were already tumultuous. "The community here, in general, has been really weird for the last two years because of the downfall of the banks," Kristín said, "There’s a lot of anger in the society." In an inconvenient coincidence, a government report that evaluated the economic crash, how it happened, and who was to blame, was released just the day before Eyjafjallajökull stole the spotlight. The eruption came at a time when the country's mood was already volatile.

But Icelanders seem to have kept their sense of humour. "We’ve been making jokes that it’s God punishing us for the bank thing."

Kristín echoed Valdimar's sentiments: an even bigger concern weighing on Icelanders' minds is Katla, she said. The big mama of a volcano has erupted within three years of Eyjafjallajökull's other eruptions in the recent history. Kristín said that people are murmuring about evacuating Reykjavík if Katla goes this time.

"If she goes, we go," Kristín's coworker chimed in.

"To where?" I asked. "I don’t know. We’re an island," Kristín replied, shrugging.

Like María, Kristín thinks Icelanders feel resigned to the whims of nature. "It’s not in our hands. It’s just a force of nature doing it’s thing. We just have to stand by and ‘ok take your time.’ It’s really trying to be just humble."

A particular well-worn Icelandic expression is apt in this situation: reddast. Roughly translated, Kristín told me, it means "things are gonna be okay eventually."

Photo above is Volcanic Bedroom installation by Inga Sólveig, as seen through the front window of a gallery in downtown Reykjavík. Volcano photo behind bed by Vilhelm G. Installation was accompanied by volcano audio, by Kristinn Gunnar Blöndal, pumped out onto the street in front of the gallery.

As airline disruptions come home to Iceland, VO blogger Stephanie Orford gets stranded in a small town, along with a pack of rumpled air travelers. But at least there're hot dogs, Orford reports. And
Stephanie OrfordApr 23rd, 2010 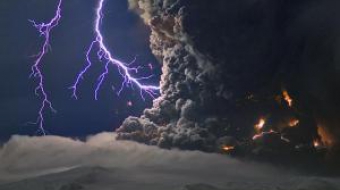 Here's the breakdown, plus a little note for the future: Katla's the one to watch.
Barry SaxifrageApr 19th, 2010
Speak up about this article on Facebook or Twitter. Do this by liking Vancouver Observer on Facebook or following us @Vanobserver on Twitter. We'd love to hear from you.