Flights across Europe have been grounded since April 14th because of the recent volcanic eruption in Iceland. Whether the pause in air traffic will reduce the human population's carbon footprint this week, however, remains to be seen for several reasons...

FLYING
It is hard to say what flight impacts will be globally until all the people have flown home. Also most of the world's flights have not been affected. Even in EU the timeframe less than 2% of a year so far. So total reduction in flying emissions is likely to be minimal. Not much of a story there.

1) COOLING They cool the earth for a couple years because of the sulphur they shoot into the statosphere which is reflective (like little mirrors). After a couple years this sulphur is mostly removed back down to earth. Because of the way the statosphere circulates, only big volcanoes from the tropics are able to spread their sulphur worldwide and effect global climate significantly.

2) WARMING. Volcanoes also emit CO2 which adds to greeenhouse effect long term. In fact volcanoes are the primary source of natural CO2 in our atmosphere and that is the blanket that has made earth warm enough to not be a frozen hunk and to actually have life. So Volcanoes have been the source of the essential warming blanket of the earth. However averaged over time volcanoes have been adding CO2 at a small rate of about 2% of human CO2 additions. Tiny.

Excellent one page overview on volcanoes and climate.

ICELAND'S VOLCANO
This volcano is small in volume so far...so it hasn't put much sulphur or CO2 in the air compared to the big volcanoes of last hundred years. Also it is northern, which will keep the sulphur from spreading worldwide and will probably mostly get pushed to the north pole and forced down relatively quickly.

Not much cooling or warming impact so far. The wild card is that this volcano has a big sister called Katla, which has erupted afterward in the past. This could be a major event, dwarfing what has happened so far both for flying and for climate.

Excellent one page overview on this volcano and climate.

CLIMATE CHANGE CAUSING MORE VOLCANOES
One other interesting aspect of climate and volcanoes goes the other way. Scientists have published findings in recent years speculating that melting ice caps and rising seas will cause the earth's crust around volcanoes to rise and bend...thereby changing the pressures in the magna chambers and unleashing more volcanoes. For example Greenland is expected to rise as much as a kilometer if all its ice melts.  Here is one report on climate changes effecting volcanoes and geology.

A study of Iceland's geologic history shows that volcanoes were 30 times more frequent at the end of the last ice age as the icesheets melted. Here is story about that.

The airline industry oftens says the climate impact of jet pollution is 2% of humanity's total footprint. But the latest and best science, including IPCC special reports on the topic, puts the actual impact at 4% - 8%. In addition, the black carbon in vapour trails of jets is estimated to have caused 15% - 20% of the stunning meltdown of the Arctic. Here are details.

Want to see at a glance the climate trade-offs of many transportation options? Check out my often requested chart. Looking for a top-rated flying climate calculator for just about any flight, that actually follows the best IPCC science and not just industry greenwashing? Here is a great one. 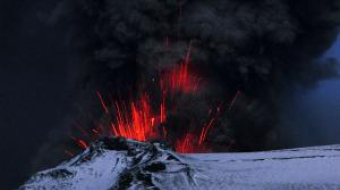