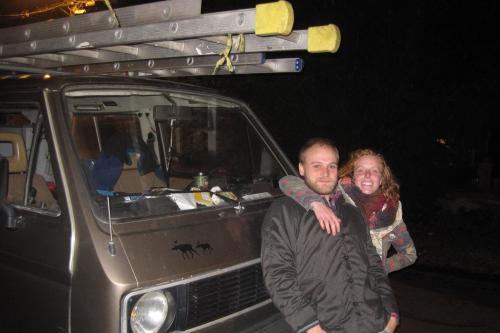 Photo courtesy of Ryan Lermitte, University All In One.

Remember that scene from National Lampoon’s Christmas Vacation, where the kooky Clark Griswold illuminates the neighbourhood with his 25,000 twinkly imported bulbs?

Well, the exterior decorating around Vancouver may not be quite as spectacular as the Griswolds’, but in many residential areas the Christmas spirit is alive and shining bright.

Not every homeowner has the motivation – or the ballsiness – to get up on the roof and string up a thousand little light bulbs. But for Andrew Erb and Beth Chipman, Christmas light installation specialists with University All In One, it’s just another day at the office.

“It’s the scariest job ever,” said Erb with a grin. “And it’s the most dangerous.”

As former treeplanters, Erb and Chipman are used to a little danger on the job. But Erb describes one particularly terrifying experience on a steep, slippery roof, when one wrong step could have sent him flying over 60 feet to the ground.

“It was the highest peak that I’ve had to do that way,” he said. “As soon as you’re on the roof, you have to be holding the underside of the roof, which is sometimes two feet under where you’re sitting. You’re just reaching down holding so you don’t peel off.”

“I felt sick to my stomach,” added Beth, recalling her reaction as she watched her partner climbing up.

The two rookie installers have been trained in proper ladder placement and safety, but sometimes they decide a dangerous job is just not worth the risk. The company is covered by WCB insurance -- but if all goes well, they’ll never have to use it.

Ryan Lermitte, owner of University All In One, has been in the Christmas light business for three years. While he respects those who tackle the job themselves, he says there’s a clear difference between a “DIY” project and a professional job.

“I mean, you can hang lights, or you can actually install lights,” said Lermitte.

So exactly how much are people paying for this service?

Well, Lermitte explains that the cost really depends on the design and the amount of light strands used. The minimum cost for the labour is $150, plus the cost of lights (which the customer gets to keep with a two-year warrantee). You’d be hard-pressed to get the job done for under $600, and if you want to go all out – lights on the house, garage, trees, hedges, fences and so on – Lermitte says “the sky’s the limit”.

“It’s not cheap,” he explained.

“I pretty much only do work on the West Side of Vancouver, Richmond, and West Van or North Van. Those are the markets that can afford it – for the most part.”