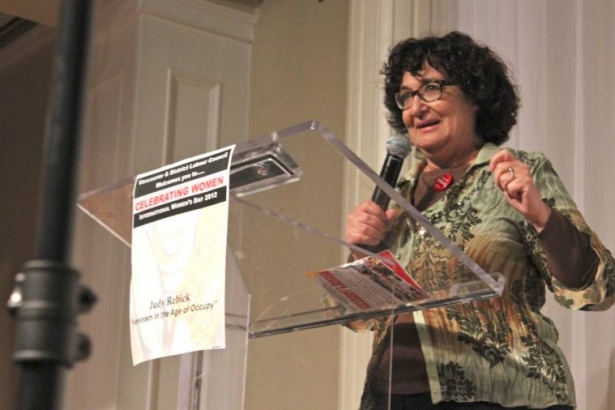 For Hartman and the VDLC, International Women’s Day (which is coming up on March 8) is a chance to reflect on past gains and refocus on current struggles.

Keynote speaker Judy Rebick echoed this theme in her talk on “Feminism in the Age of Occupy”. Rabble.ca founding publisher, long-time feminist activist, and author of a new book, Occupy This, Rebick kicked off her talk with a statement of solidarity with the BC Teachers in their fight against the BC government’s attempt to unilaterally impose their contract.

To illustrate how things have changed for women in Canada, Rebick recounted her experience as a McGill student who was turned down working for the campus newspaper, told the male writers swear and having a woman in the press room would cramp their style.

Rebick noted that from the late 1960s to 1980s, Canadian women won reproductive rights, legal abortion, enshrined equality in the Charter of Rights and Freedoms, increased awareness of violence against women, and made advances on pay equity and employment equity.

She noted the role labour unions have had in advancing women’s rights, including the Canadian Union of Postal Workers, who in 1981 went on strike for maternity leave and ended up winning that right for women across Canada.

“We achieved a lot, but we still have a way to go,” Rebick added, singling out particularly the struggle to end trafficking of women and to end a “rape culture” that blames victims for their assaults.

Through the history of the women’s movement, Rebick noted there has been a cycle of advancements and backlashes. But she credits a new generation of young activists such as those involved in the Occupy movement with making sure we haven’t had our rights eroded in the past few years.

“We’re stalled, it’s true, but we still have those gains and most important we have a new generation of activist women that’s stronger, more powerful, more sure of themselves and increasingly willing to fight…and they don’t have the insecurity that we had,” she stated.

"More and more what we're seeing is that women's issues are connected to all the other issues," Rebick said, noting how women led protests in Tahrir Square and created unique global movements like SlutWalk, an event to raise awareness against victim-blaming for sexual assaults against women.

"The women's movements and all these other movements have something in common: they're based on compassion."

In the end, Rebick encouraged guests to stay involved in the struggle for women's rights, the environment, and a more fair and just society for all:

"People are waking up to the fact that the only way we can change the world is by changing the way we relate to each other."