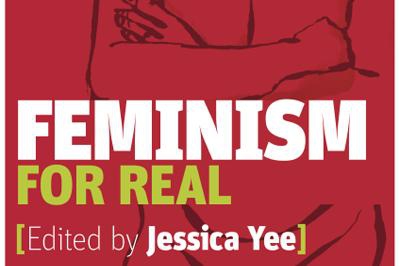 If I had to pick a must-read book from those I've read this year, it'd be  Feminism for Real: Deconstructing the Academic Industrial Copy of Feminism, edited by Jessica Yee, a  "Two Spirit multi-racial Indigenous hip hop feminist reproductive justice freedom fighter," who founded the Native Youth Sexual Health Network.

I read a lot. But this book has been more important for changing how I think about my feminist activism than all the books I've read in the last year combined. You can read some preview excerpts at the Canadian Centre of Policy Alternatives' website (they're also the book's publishers), but I would encourage you to buy the book and read the whole thing for yourself.

Feminism For Real is aimed at people who "haven't yet engaged with feminist dialogue or academia", and also people like me: the privileged, straight, white Women's Studies set of feminists. But as Ashley at Bitch writes: "This book does not require you to have studied feminist theory in academia, and explains to us that mainstream feminism shouldn't either."

Yee and the book's contributors are mostly people who have been sidelined in some way from mainstream feminism and its academic ties - through race, sexual orientation, gender expression, colonialism, and/or class. The book's writers have different backgrounds and different views on the possibilities of academia to ever be a site of social change - some believe real feminists should just say no to the Academy and join real grassroots movements, while others believe there are feminist academics trying their best who just need to do a better job  examining the problems they often unwittingly reinforce by being part of the Academy.

It's not a hate on of academia or feminism, but it challenges us to look at how inaccurate our claims of empowering other women can be when they're built on unexamined privilege and unquestioning acceptance of white people's knowledge.

Reading other reviews of this book on Bitch magazine blogs and elsewhere in the feminist blogosphere, I've seen a lot of people respond with really defensive comments. And I'll admit that it iwas hard for me to read the book without getting a bit defensive. It's hard not to read examples of how people felt marginalized in their Women's Studies classes without thinking, "Well the classes at my school weren't like that, so this has nothing to do with me."

But the more I read, the more I realized that I am complicit, and besides, as a straight, white, middle-class feminist with an academic background, I'm the last person who should be evaluating how inclusive the academy is, or how successful it is at breaking down inequalities. It's up to me to take responsibility for my privilege and try to make changes and become a true ally, but it won't be up to me to say if I've succeeded. One contributor in Feminism For Real talks about their "blood memory" as a First Nations person - the memory of how you and your ancestors were treated and continue to be treated under colonialism.

Not only did my ancestors not experience these things, I continue to profit off legacies of inequality.

That's why I needed to read this book, and why I have to try to implement the recommendations made in the last section by Krysta Williams and Ashling Ligate for "Deconstructing Dialogue in Feminist Education". I've examined my privilege in previous blog posts, but it's something I have to work on every day, and I thought Williams and Ligate had some fantastic suggestions. I won't list them all here because I think you should get the book and check them out yourself, but I'll end off mentioning a few in particular that are ones I need to keep working on: 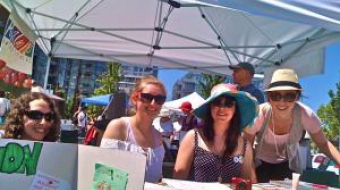 Vancouver recently held its first Love Vancouver Festival, a festival of green art, music and lifestyles. Over 6,000 people people gathered at the Olympic Village to take part in the...
Loretta A. CellaJun 12th, 2011
Speak up about this article on Facebook or Twitter. Do this by liking Vancouver Observer on Facebook or following us @Vanobserver on Twitter. We'd love to hear from you.