SlutWalk coming to Vancouver in May 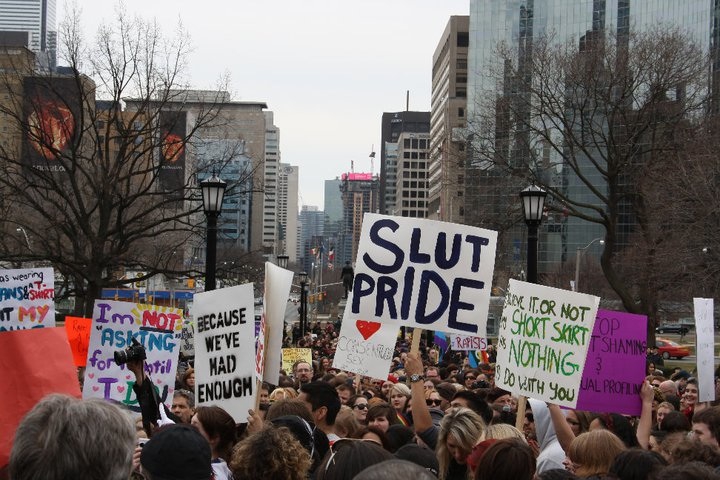 Toronto's SlutWalk, held April 3, drew more than 1000 protesters. Photo from Marcel and Me.

On April 3, over 1000 protesters took to the streets of Toronto as part of an event called SlutWalk. The event was created to protest a comment made by a Toronto Police representative, who, speaking to York University students, asserted: “women should avoid dressing like sluts in order not to be victimized”.

The remark and SlutWalk event sparked a public debate about the term "slut" and now spin off events are happening across the country, with a march being organized for Vancouver for May 15. Organizers of the Vancouver march point out that the attitude of victim-blaming expressed by the Toronto Police officer wasn't isolated. A Saanich Police representative recently drew fire for encouraging women to "Travel in groups, stick to well-lit areas, be mindful of your drink, where you leave it, and who you accept a drink from", a remark that was seen by some as putting the onus on women to avoid being raped, rather than on attackers to stop assaulting women (the Saanich PD has since said they were misquoted).

SlutWalk Vancouver organizers are hoping they can pull off an even bigger turnout than Toronto. Approximately 2500 people have already RSVP-ed on Facebook and they're hoping to get at least 1500 of those people to the event. While a final location hasn't been confirmed, it will most likely take place downtown, with participants marching from the downtown library to the Art Gallery via the Granville Strip. SWV isn't partnering with local organizations but they are working to establish a list of allied organizations, which they hope will be posted on their website next week.

I interviewed organizer Katie Raso about the idea behind SWV and how they're dealing with the debate around the event name and concept.

Raso said the main focus of SWV is the same as SlutWalk in Toronto: "We work within Toronto's mission of aiming to create a safe, inclusive space wherein people can speak out against the culture of victim blaming and sex shaming that excuses away acts of sexual violence," Raso stated.

But some commenters on news sites and radio shows discussing the march have argued the event is just encouraging women to dress provocatively  in public and promote promiscuous behaviour. And organizers have noticed the same backlash on their Facebook page. But Raso says that's not the point of the event at all.

"We are recommending that people dress however they normally would dress, however they feel comfortable. There is a popular misconception that we are asking people to 'dress like sluts' which is completely contrary to our mission," Raso argues. She notes the point of the walk is to challenge how the label is used.

"We recognize that 'slut" is most commonly used in our culture to denote a woman who is assumed to be sexually promiscuous because of how she is dressed, or because of her mannerisms, and that as a 'slut' she is worth less and deserves less protection. The SWV organizers recognize that there is no such thing as dressing like a slut, and no one ever dresses for assault. Step one to confronting this notion is coming to the walk dressed however you normally would," says Raso.

Raso is also encouraging supporters and participants to volunteer and to help publicize the event.

"What we need right now are people to help with fundraising, and activity planning. Folks who want to support the cause can check out our website for more details: www.slutwalkvancouver.com", Raso says.

But even more important, according to the SWV organizers, is having conversations about SlutWalk and the rape victim-blaming culture it's taking on.

Raso sees that as the real power of SlutWalk: it's ability to "start dialogues about victim blaming, how pervasive it is, and how to confront the challenges related to victim blaming and shaming. The incredible number of satellite walks popping up indicates to me how ready people are to have these conversations and the SWVancouver organizing collective is thrilled to foster dialogues in our community."