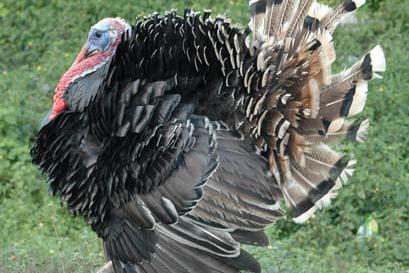 “As God is my witness, I thought turkeys could fly.”

So said Arthur Carlson when his radio station WKRP dropped live turkeys from a helicopter in a Thanksgiving publicity stunt that went terribly wrong.  The hapless birds, according to newsman Les Nesman, hit the ground "...like bags of wet cement."  The TV sitcom was based on the Turkey Trot Festival in Yellville, Arkansas, which ran for more than 40 years and included tossing live turkeys out of a low-flying airplane until animal rights activists put a stop to it in 1989.

Turkeys may have (delicious) wings, but they really can’t fly.  At least, not domestic turkeys.  They belong to the order of galliformes -- ground-dwelling birds such as pheasants, quail and partridges.  Wild turkeys are capable of short flights – more fluttering hops than anything else.  But domestic turkeys can scarcley trot.

My step-mother used to say that turkeys were so stupid that they would drown in a rainstorm because they stare at the sky with open beaks, transfixed by the raindrops.  She grew up on a farm in Saskatchewan, so I figured she should know about stuff like that.

Turkeys don’t look all that bright.  Their heads are tiny compared to their bodies, and they have that red rubbery skin around their eyes, and hanging over their beak.  That little dangly thing is called a snood (not to be confused with the close-fitting knitted hood worn over long hair), and turns bright red during courtship, or when the turkey is stressed.   Or both.

Nobody really knows what the native North Americans and the pilgrims ate on that first Thanksgiving in 1621.  But almost half the 102 people who came over on the Mayflower less than a year earlier had died of starvation.  No wonder they were thankful when the locals brought venison and other game when they were invited to a harvest potluck.

Wild turkeys were probably part of the feast.  And just as the pilgrims thought they’d landed in India and so called the local people Indians, they thought that the large, almost flightless birds they saw were Turkey Fowl, and so they called them Turkeys. 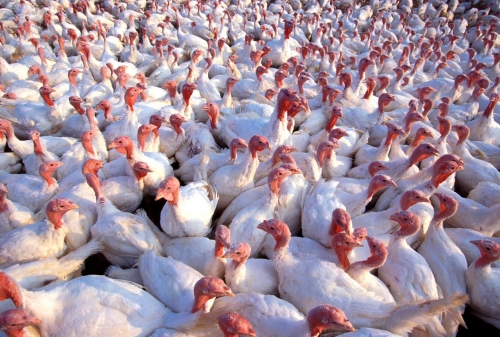 The thing about a turkey is that it can feed a lot of people.  These days a male turkey can grow to 40 pounds in 20 weeks.  Feed conversion rates for turkeys are two to one.  That means you get one pound of meat for every two pounds of feed.  The feed conversion rate for cattle and sheep is eight to one.

Breasts and thighs are what turkey producers want.  White meat by the pound from the breast and juicy dark meat from the thighs.  Most toms produce so much breast meat, they’re unable to mate.  Which is just as well, since the hens are artificially inseminated to control factors such as feed conversion rates.

And then there’s all that room for stuffing.  Turkeys are so big now that you could stuff one with a chicken if you wanted to, and some people do.   In fact, they don’t stop there.   Modern cullinary science has created the turducken, a turkey stuffed with a duck stuffed with a chicken, all of them boneless and ready to carve. 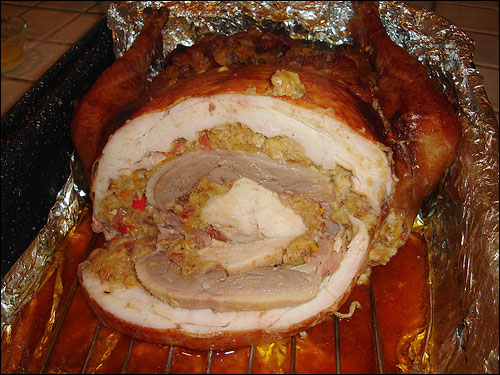 As for why turkeys stare at the sky, Tom Savage may have found the answer.  He’s a professor of Animal Science at Oregon State University.  His research in the mid 1990s turned up something called tetanic torticollar spasms, an inherited condition in domestic turkeys that causes the neck to elongate and twist for up to a minute at a time, making it seem as if the birds are staring at the sky.

Or maybe they are, because they wish they could fly. 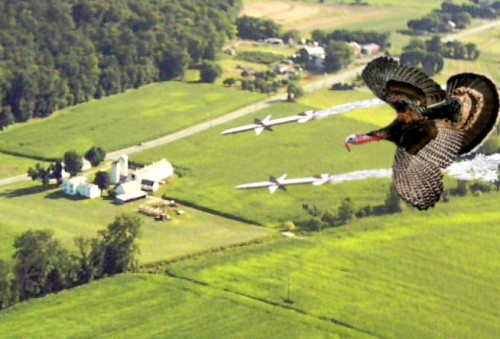 How to make brussels sprouts taste good this Thanksgiving