Bard on the Beach does As You Like it 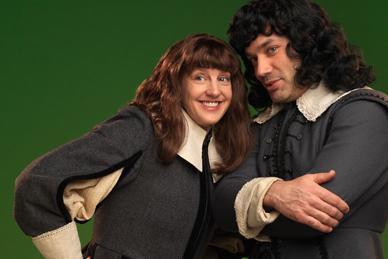 Bard on the Beach has a special treat in store this year with its brand new Mainstage Theatre. This marks the start of a new era and is history in the making as Bard on the Beach Shakespeare Festival's 22nd season christens the stage with the romantic comedy As You Like It.

The new 742-seat custom-built stage was designed by Jessie Award-nominated Kevin McAllister and provided the perfect setting for Director David Mackay to showcase this amusing play.

As You Like It is a story of love, adventure, sibling rivalry, and redemption.

Duke Frederick has usurped his younger brother Duke Senior, banishing him while Duke Senior's daughter Rosalind (Lois Anderson) remains behind. Nearby another two brothers, from the estate of the noble de Boys family, are having their own set of troubles. The younger Orlando (Todd Thomson) argues with the older and wiser Oliver over family entitlement: rivalries flare and plans are hatched.

Orlando later wrestles the Duke's prized fighter and unexpectedly wins, which foils the evil plans of his brother and draws the attention of Rosalind. Orlando and Rosalind have a brief verbal exchange and, in true Shakespearian fashion, fall madly in love. Both events infuriate the Duke and he banishes Rosalind spurring her to do what any blue-blooded Bard babe would do: gather her wealth, jewels, and best friend, disguise herself as a male and a commoner, and head for the Forest of Arden to find her banished father.

Orlando, fresh from the win, returns home to discover his brother's rage is tantamount to burning his house down with him in it, so he flees with his friend (you guessed it) to the Forest of Arden.

Rosalind and Orlando cross paths again, only this time she's a young boy (Ganymede) with an uncanny wealth of knowledge of the do's and don'ts of appealing to the female heart: and it just so happens that Orlando is in need of some romance assistance. Anderson is brilliant in her portrayal of Rosalind and really hits her stride, once she steps into her disguise as Ganymede, and hilarity ensues as she/he manoeuvres Orlando through the art of wooing.

For fun, Touchstone (Ryan Beil) is invited along for Rosalind's adventures as Ganymede and ends up falling in love with a dishevelled goat herder named Audrey (Amber Lewis). Beil's comedic timing as the clown is impeccable.

Kevin Mackay's stage design is beautifully minimal which allows for the actors to more freely create the atmosphere around them and Murray Price's music and sound are clever and well placed adding to the imagery.

Paths are crossed, love is found, relationships are mended. In the end, all ends well with a multitude of marriages, patched family relations, and restored courts.

As You Like It runs until September 24. check out www.bardonthebeach.org for tickets and show times