Robert Plant and the Band of Joy 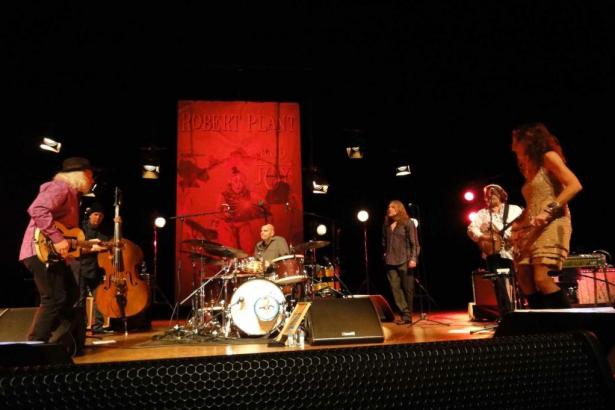 When Robert Plant and the Band of Joy played a sold out show at the Queen Elizabeth Theatre Sunday night, they had barely set foot on stage when the audience jumped to their feet in a raucous standing ovation -- and stayed there until the end of the show.

Front man Plant reached the height of legend in the '80s with his band Led Zeppelin and countless iconic rock albums like Houses of the Holy, Led Zeppelin I, II, III, and Physical Graffiti, to only mention a few, that still sell like wild fire today.

Plant's sound has rolled out different styles over the years from the rock of his Zeppelin years to the melodic sound of his work with Alison Krauss to his more recent sound with the Band of Joy and their new self titled album Band of Joy. Over 40 years of making music and he still grabs his audience with the same magnetic charisma of someone born to be a musician.

Sunday, the band wasted no time and delved into an interesting new take on the Led Zeppelin classic Black Dog, which set the tone for the night. Songs from past to present fit together as if they'd been written in the same era.

Plant stepped back several times during the show as other band members took turns at centre stage singing and playing an array of different instruments. First Buddy Miller on vocals, then Darrell Scott, then vocalist Patty Griffin.

The highlight of the show was the last song of the night Ramble On: (Led Zeppelin II). The audience ate it up. There wasn't a gap of space left in front of the stage that wasn't filled with someone dancing and singing along with Plant as he belted out the lyrics. The audience was high on more than what was wafting through the air that night: there was a palpable energy in the room.

What do you call a standing ovation when everyone's already on their feet? Well whatever it is, they got one: a loud, fit pumping, wall shaking ovation.

Plant gave one last wave to the audience after the the third bonus song and yelled out “Vancouver, never change.” And with any luck Plant, like the Song, will always Remain the Same.