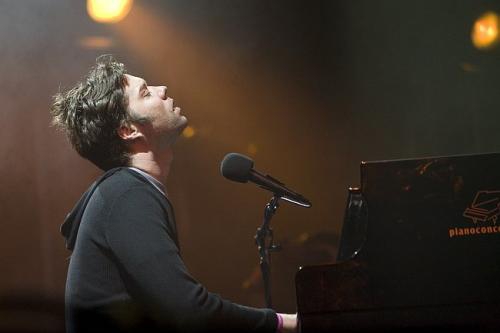 It's always been a point of interest to check out the crowds at the shows around town to see if you can get a feel for what you're about to see. Most of the time it works: tonight, not a chance.
Sometimes that makes an evening even better though: it certainly does in this case.

As the lights begin to dim in the auditorium the announcer reads a short introduction to the show we're about to see and hear.
We're here to see Rufus Wainwright live in concert for the first time.

Wainwright has put together a multi-media performance piece for the first half of the show and has asked that we withhold any applause until after he fully exits the stage: his entrance and exit are part of the show. The audience is intrigued and gladly complies.

Being huge fans of live theatre, we're more than a little pleased when the lights go down and a brilliantly costumed Wainwright steps onto the moodily lit stage.

With his signature tousled hair, dark painted eyes, and an elaborately feathered coat with a beautifully edged, thirty-foot train stretched out behind him, he slowly walks across the stage towards his piano. 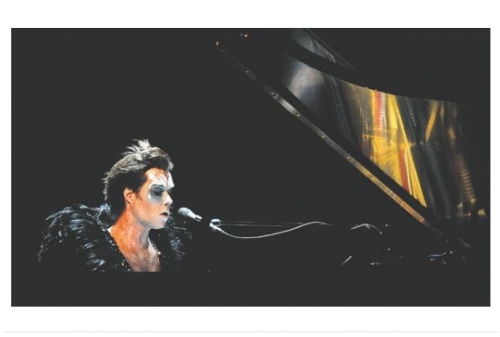 He's beautiful. He has a presence both strong and vulnerable, and a voice with such control and power it cradles its listener with an indescribable comfort.

The audience is silent. You can hear a pin drop between songs. Wainwright drifts from song to song pulling us along through stories of love, loss, and longing. A large painted eye blinks slowly on the screen behind him, pushing out tears that travel in slow motion across the length of his eyelashes.

At the climax of his performance he steps away from his piano and slowly exits into a brilliant ray of light. He's barely off stage when the crowd erupts in applause.

The second half of the show is a lot more subdued: a lone piano highlighted by rows of candles sprinkled across the floor.
Wainwright introduces a guest singer, Teddy Thompson, who had opened his show thirty minutes earlier. His voice is as extraordinary as Wainwrights and the perfect compliment. The two sing a beautifully harmonized song called The Maker Makes, from the film Brokeback Mountain, and Hallelujah.

Wainwright pauses from time to time throughout the show to talk to the audience, making jokes, announcing future show dates, and amusingly plucking an annoying hair from his nose.
The biggest applause though, came from the announcement of his recent engagement to partner Jorn Weisbrodt. “we're trying to decide whether we'd like to have the wedding here or...”, says Wainwright, as he's interrupted by a wave of cheers.

As he finishes the last song of the evening the crowd is on their feet before he's had a chance to stand up from his piano.
“Rufus!”, a man yells from the back of the room. Wainwright smiles and gives a quick wave of appreciation.

The Centre has a reputation for offering some of the best shows in town. Check out The Centre for listings.