The Hobbit comes to Capilano University 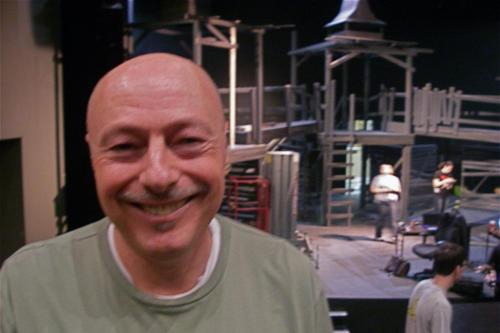 Multi-talented Stuart Aikins brings the elaborate production of The Hobbit to the Capilano University theatre this month. Aikins gives us some of the insights into bringing such an elaborate play to life.

WD: Can you start by telling us how this project came to be?

SA: The department had decided that they wanted to do The Hobbit as part of their season and then I was approached to see if I was interested in directing it. I made a presentation of how I wanted to do it and they accepted that presentation.

Part of my issue was that the translation or adaptation they were using was written for a children's theatre in Manitoba in 1999. I felt we had to update it and become a little darker and serious in our approach because I think that the audience in 1999 is different from the audience now, especially for young people.

People now are watching video games, they're avatars in live stuff on video, and they've all watched Lord of the Rings 37 times and know it inside out and they're all mildly crazy about the idea of the Hobbit movie in two years, so I needed to have something that had more weight and depth to it. That was my biggest problem and I think we conquered that: we approached it with a style that will be entertaining to kids but it will also be entertaining for adults.

WD: What were some of the biggest challenges you faced with this production?

SA: I think the biggest challenge was that, endemic to the story, we have fantastical items like Smaug the dragon, and we have trolls and goblins, and even in the script Gandolf take his staff and blows up a goblin king and the eagles come and fly them all away.

In the adaptation one of the central characters had little figurines that she lifted out of her pocket: those were the eagles. I just looked at that and thought that was really children's theatre and very lame. We had to come up with great ideas on how to do flying and create smog and so I've taken a core group of twelve actors here at the theatre and and we worked them from the physical side.

They're what we call the Kuroko group. In Japanese theatre the Kuroko are basically the stage managers. They're on stage, they all wear the same color gray, they exist and they don't exist.
If a lead character needs an umbrella or a fan they give it to them. The convention is they don't exist or in our same convention here they create all of those characters and lots of other things. They double as extra dwarves, elves in one scene, goblins in another.
They're completely blacked out: we never see their faces, they're anonymous. That was our biggest challenge.

There's a Japanese sensibility to the whole show. When you look at it I'd probably have to point it out to you, but there's a lot of Japanese influence in the style of the way we built the set, and what it looks like, and the costumes and the appliques of the materials, and we've used that as a sensibility as an underlying theme through the design.

Also from a technical point of view building a stage in the theatre, in the house, right around where the audience is sitting. I wanted this journey play, which is what this is (Bilbo Baggins and the dwarves go on a journey to get their treasure back), to come off of the stage and spill into the audience.

In The Hobbit a group of thirteen dwarves come with Gandolf the wizard to find Bilbo (the hobbit) because he is the missing element that they need use to go and steal the jewels and get rind of Smaug the dragon. That's the basic premiss of the story only in this adaptation there are five dwarves.

WD: Was there anything that took you in a direction that you didn't expect?

SA: When you're dealing with students who are all from twenty to twenty-four, except for one student who is a bit older, you have a cast who are to portray characters like Gandolf, who is supposed to be 150. I'm obviously not going to have an adult play Gandolf: I have a twenty year old guy.

I've had to adjust our thinking regarding those kinds of things. That was one of the surprises: having to find a younger more vital way of doing it.

Danny and the Deep Blue Sea