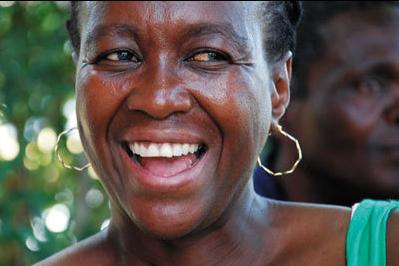 “Director Chiara Sambuchi's documentary follows four women from four different African nations: Uganda, Senegal, Mozambique and South Africa. Ndeye who runs a garage called Femme Motors in Dakar, must balance the demands of being a woman in a Muslim culture with her own sense of independence. In Mozambique, Marcia struggles to teach rural villagers the importance of economic self-reliance. Grace, who works as a nurse in South Africa, is dealing with the demands of a busy hospital, looking for a boyfriend, and bemoaning the fact that good men are hard to find. Margaret runs a radio program in Uganda that seeks to broadcast information about contraception, safe sex, and issues related to the emancipation of women. In a predominantly Catholic country, she has to battle not only religious and cultural mores, but also her own family dynamics.”

Sambuchi sits down with The Vancouver Observer to talk about her film, Good Morning Africa, and how making it was both challenging and inspirational.

WD: What gave you the idea to do this film?

CS: I got the idea while talking with a girl that I met on a train. I was travelling to Italy and at one point I saw a very good looking girl sitting in front of me. I supposed she was African. After a while we just started to talk. She seemed really nice and I love to talk to people I don't know. Very often you discover very interesting stories.

I had no clue about Africa. I knew a lot about the middle east because I'd already filmed there, but I didn't really know about sub-Saharan Africa. I started to talk with the young woman and she told me how important the role of the woman was in Africa. It was a very big surprise for me because, not knowing Africa, I had an idea full of stereotypes.

In Europe it's pretty common: the idea of a society in which women work very hard, have a lot of problems, are submissive, and men are very often violent. The men are the ones who have the power.

I was very surprised so that's why I started researching the topic. That's how the adventure of Good Morning Africa started.

It happens to me pretty often. You discover very interesting stories just talking to people in a small way.

WD: What was one of the most challenging things you face making this film?

CS: We shot in Uganda. That was very, very challenging. Somebody stole all our equipment during the first days of shooting. We had to find more equipment, deal with the police, and so on.

The biggest problem however, was that even though there are a lot of powerful women who fight and do a lot of things to try to improve the lives of other women, it was hard to see the kind of violence that is still experienced. That was very, very challenging.

There's a moment in the film where Margaret, the journalist from Uganda, goes to the countryside and talks to the women and tries to explain to them that they can protect themselves through the use of condoms and the pill and so on. There's one woman who is a bit skeptical and says, “Well it doesn't do a lot if I take the pill in the afternoon and the man rapes me in the morning. The pill doesn't work. It's not really useful” and everyone laughs.

WD: I remember that moment in the film. It was very poignant.

CS: Yes. Indeed. In one way it's very interesting to see that they are able to laugh about like that, but for me it was very tough and challenging to see and experience that this kind of violence for them is very common and at the end of the day very normal: it's part of their everyday life.

On the one side you think, “wow, they are able to laugh at something like that” and on the other side I think it's very shocking for people who are so far away from that society. It really touched me but it was difficult.

Travelling through Uganda there were a couple of moments, for example when Margaret was talking about cases in which the vagina and anus had become one organ because of the very frequent violence. It's not only difficult to understand it, it's difficult to even imagine it. That was tough.

WD: Did you have any discoveries along the way. Anything that stood out from the rest?

CS: Yes. It was a very long trip. I actually went there many times. I did two very long research trips in order to find the women, and I went another time around Uganda to shoot. There was the shooting schedule and then there was my own trip, which was for me as a person, not only as a filmmaker.