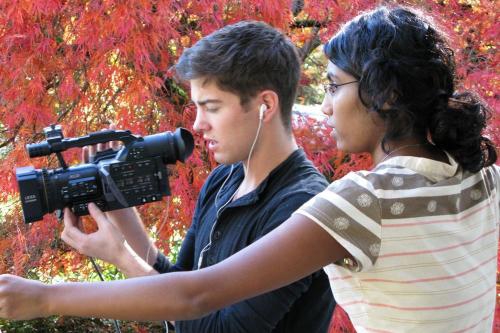 VO: Could you tell me a little about yourself.

PL: I graduated from the film production program at UBC. It was there that I met our second director/producer, Nimisha Mukerji, with whom I did this project.

We hit it off right away and knew that we worked well together. We wanted to make movies outside the program. We both did a few shorts in our third and fourth years that did quite well, and they went to the Toronto Student Showcase.

We knew that we wanted to make films, but when we graduated we both took on jobs in the film industry as production assistants and producer assistants. While working, we were going “oh my god, we have to make something” because you can work on a big Hollywood show, but you're just going to be hired help. You can't really work up that way. So we thought, we've gotta do our own film.

We had a teacher, John Zaritsky, an Oscar winner, who was our documentary professor. He's done a lot of great films and he encouraged us to find a documentary “because there are great stories in your back yard.”

I graduated from university and my friend Eva Markvoort, the subject of the film, I knew from first year because I originally thought I wanted to be an actor, and was in theatre at the University of Victoria with her.

At that time we became very close, before I left and transferred to UBC.

We kind of fell out of touch a little. But when I graduated she gave me a call and told me she was at St. Paul's waiting for a double lung transplant. And I'm going “what?” it just blew my mind.

Because from the outside she's a beautiful girl and didn't look sick to me at all. She never acted like she was sick. I knew she had cystic fibrosis, but didn't know the extent of how bad that disease really was. I didn't know much about it. And so in that moment a light bulb went off and I thought “that's it. this is a great story. This girl is waiting for someone to die in order for her to live”.

I knew nothing about organ donation. I wasn't even an organ donor at the time and so I brought Nimisha and we met with her and from that moment we realized we wanted to do a documentary on her.

VO: So you're an organ donor now.

PL: (laughs) Of course. Right away, once I knew she was on the list I said “oh my god, I'm signing up right now” who knows if I won't get in a car crash, or something will happen to me, you know. I can save a life not even knowing it. You pass away but all your organs are perfectly intact so why not save four or five people's lives with the parts of your body.

VO: Could you like to tell us a bit more about your film?

PL: Yes, it's called 65_RedRoses, and the reason behind that title is, when you're little and you have cystic fibrosis, kids can't pronounce it so parents tell them to say 65 roses, and red is Eva Markvoort's favorite color.

65_RedRoses is Eva's online name that she uses to connect with other girls and boys that have cystic fibrosis or have gone through transplants. It's an online community, kind of like Facebook or MySpace, where they can connect and talk about their fear, waiting for transplants, or about cystic fibrosis.

The reason why they talk online, is that when Eva was waiting for a transplant, she couldn't be around other people with cystic fibrosis, or people who had transplants, because of the fear of spreading super-bugs, infecting each other.

Because they're so sick, if she got a bug from someone else, she's be taken off the transplant list. She would no longer qualify for a transplant.

She was isolated and she could only talk to friends and family and people who were healthy. We can be supportive but we don't truly understand her situation. People who do, are people with CF or who've have transplants, so that world she started to gear into when she waited for a transplant.

That was basically the arc of our story. Finding a few girls online that she's best friends with. You'll go the distance to tell each girl's story. Girls that are best friends that have never met in person. Eva's plight, going through transplant, and these two girls who are in different stages of transplant as well.

One girl is Meg, from Portland, who was addicted to pain killers and doesn't want a transplant. She's not going to be able to get one because she isn't compliant with her medication.

And there's the other girl Tina, from Pennsylvania, who already had a transplant and now is in chronic rejection and might need another one. The three different faces of cystic fibrosis.

VO: In your film, Eva is waiting for her pager to go off. Can you tell us a little bit about this moment?

PL: That's when we knew we had a movie. I can't believe we captured her pager going off. The thing for us was that we were so scared. We had to shoot so much before the pager went off because we were so worried that it could go off tomorrow, and we hadn't even got her back story yet.

We followed her for about eight or nine months before her pager went off.