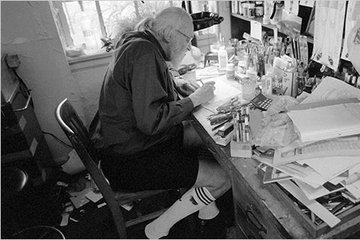 Director Brett Ingram's documentary Rocaterrania is a journey through the incredible imagination of the brilliant artist, writer, and visionary, Renaldo Kuhler.

Kuhler works as a scientific illustrator for the North Carolina Museum of Natural Sciences.
He grew up in Germany and in 1948, when he was 17, moved to a remote ranch in Colorado. Introverted as a child, Kuhler found the isolation unbearable and retreated into his imagination, creating the fantasy world of Rocaterrania, “a little world made up of Eastern Europeans."

Though Kuhler's father himself was an industrial illustrator, he didn't approve of his drawings and told him to burn them all. It was at this point that Khuler began to draw in secret. He's been doing so for over 50 years and has created a world complete with maps, alphabet, language, government infrastructure, revolution and executions.

Rocaterrania is a film for the entire family. A fascinating must see for dreamers.

Check out www.viff.org for tickets and screening times.