Early 20th century fashion designers were the crème de la crème of society. They were cutting-edge and popular, representing all that was new and modern. They influenced the world around them through their style, words, clothes and actions.

Ilya Parkins, assistant professor of gender and women’s studies, says this is just one example of why fashion is an essential area of academic research—it can bring unique perspectives to history and the evolution of politics, culture and society, especially when viewed through a feminist lens. 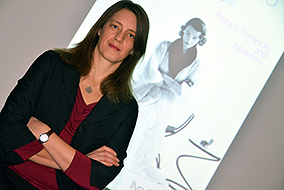 Assist Prof. Ilya Parkins makes an argument for the importance of fashion in understanding culture. Photo by Jody Jacob

“I would say most of my career has been spent working to get people to take fashion seriously as a site of knowledge production, certainly in the early 20th century but more broadly as well,” says Parkins, adding that fashion is strongly connected to femininity, and to trivialize it is, in a sense, to trivialize women.

“My work makes a case for the incredibly important position of fashion in culture. In the period I mainly study—the early 20th century—fashion was seen and written about by commentators as something that embodied the spirit of the modern. Its importance was understood. Fashion crystallized the era people were living in, and when we fail to look at that we have an impoverished analysis.”

Parkins recently published a book titled 'Poiret, Dior and Schiaparelli: Fashion, Femininity and Modernity'. The book examines how, through their own writing, these designers narrated their lives and how they perceived women and femininity—from their respected business colleagues and personal companions to the women they were creating fashion for, and abstract ideas about femininity.

“I found that the ways the designers present themselves, and the way they present women and femininity, are full of deep contradictions. For example, often the women were muses or inspirations, while at the same time portrayed in a negative light, such  as irrational for their fashion choices and orientation.”

Parkins research took her to Paris and mostly involved text from popular magazines and newspapers, memoirs and advertising.

“What I noticed, and what I wanted to highlight in my book, was that femininity was often present in sometimes ghostly ways. When a man is narrating his own life it’s essentially about being a man, but what I see with the two designers who are men in this research is that femininity is always sort of hovering around the edges of who they are.”

Parkins’ research project was jointly funded by an internal grant from UBC’s Okanagan campus and a Standard Research Grant from SSHRC.

“This research encourages a fruitful rapprochement in the uneasy and under-theorized relationship between feminist theory and fashion studies, and foregrounds fashion as a crucial element in the exciting interdisciplinary conversations about gender in modernist studies,” says Parkins.

The measure of a woman and the length of her skirt