Canada "world's best country for women" unless you're a rape victim 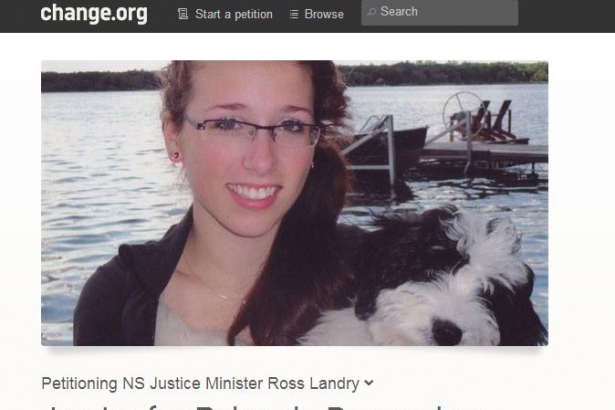 Last year, Canada was ranked the word's best G20 country for women (India placed last) supposedly for its fair treatment of women. But the recent suicide of Rehtaeh Parsons, a Nova Scotia teen rape victim, as well as the suicide of Amanda Todd, shows that this country still has a long, long way to go.

Rehtaeh was just 15 when she was allegedly raped by four boys at a party. One of them took a photo, which later went “viral” and caused her to be relentlessly bullied as a “slut” -- as though she'd somehow deserved the assault. Rehtaeh's family told the Globe and Mail yesterday that she was “not ashamed of what happened to her”, but that the relentless persecution from her peers led to depression, and eventually suicide by hanging.

Somehow, when it came to justice for the rape victim, 17 whole months crawled by without any charges. Below, text from a petition on Change.org started by a family friend of the victim:

Seventeen months ago, she was raped. The rape was photographed and the photos were shared around her Nova Scotia community. Rehtaeh was destroyed by this. Any 15 year old would be. She was called a slut. She was bullied. She faced depression. And this week she took her own life.

After Rehtaeh's rape, the RCMP investigated for a year but said there was not enough evidence to lay charges.

How is this possible? Everyone knows what happened. Everyone knows about the photos. Everyone knows she was 15 when those photos were taken. Everyone saw her being bullied and shamed at school. How can police say they didn't have the evidence they needed to pursue charges? Do we not have laws that cover this kind of abuse, from photo-sharing to cyberbullying?

The story – how her photo was passed around, how her peers allegedly shunned her in public and ridiculed her trauma – echoes that of 15-year-old Amanda Todd, who killed herself last year after a man shared a sexually suggestive photo of her to all her Facebook friends.

Is Canada a safe place for women? In what kind of society does a photo depicting rape or sexual exploitation of a minor go “viral”, like some funny story on Reddit? What kind of society is teaching teenagers that, in 2013, it's more appropriate to persecute the victim than her rapists, who walk free while the girl they assaulted remains imprisoned by shame?

Weren't some of the people who saw the photo girls or women themselves? Where was their outrage while this was happening? Why does the outpouring of sympathy from politicians always seem to come one or two years after the fact, when it's much too late to make any difference?

This is also a country where teenage girls in Ottawa are presently pleading 'not guilty' to pimping out other girls, one as young as 13, to older men. Blame for their actions could be shifted on the media, or on governments showing their lack of interest in women's safety by cutting off funding for abused women's shelters, but everyone plays a small role in why things are the way they are.

Rape happens everywhere. What should differentiate one country as being better for women than another is how people respond when they happen, especially when it happens to teenagers.

But if the story of Rehtaeh Parsons and Amanda Todd are any clue, Canada isn't any kind of beacon for the rest of the world when it comes to women's rights.

Sign the petition to investigate the assault of Rehtaeh Parsons.

Why self-defense and other “solutions” can’t end rape culture