Burlesque and feminism: It's complicated

I’ve always felt I would like burlesque, just like all the feminists I know. But, living in Vancouver, a city spellbound by burlesque’s razzle-dazzle, it didn’t take me long to discover that my initial feelings were wrong.

It’s awkward to say it, but despite the burlesque scene’s talk of empowerment and female liberation, I’ve only ever felt the opposite. I’ve wondered, am I just “not getting it”? Are my negative reactions to the burlesque I’ve been exposed to in Vancouver valid?

If they are valid, is the relationship between burlesque and feminism a lot more complicated than people think?

Diamonds are a girl's best friend

Delilah Dare is the resident dirty blonde of Nicky Ninedoor’s local troupe Pandora and the Locksmiths. She told The Vancouver Observer over email that burlesque relates to feminist women for a number of reasons, the first being that it allows women to feel good about themselves.

“It embraces women who are not present in mainstream representations of female sexuality and beauty, thereby providing a counter narrative [to today’s beauty norms],” she wrote.

Certainly, broadening beauty ideals can have a real impact on the lived reality of Vancouver women — for instance, in promoting a wider range of clothing size options.

Dare also wrote that burlesque is one of those rare artistic spaces led mostly by women. “There is still room for men, but they have to take a back seat to the women.”

Bobbi Whiskey, a performer who’s tread the boards for four years, agreed that burlesque, despite its makeup of sexy ladies and striptease, is primarily a women’s space.

“It gives women a chance to bond over something that we not only enjoy and work very hard at, but are also quite emotionally invested in,” she said. “I think that is hard to find in this world, a place where we are not pressured to compete with one another.” 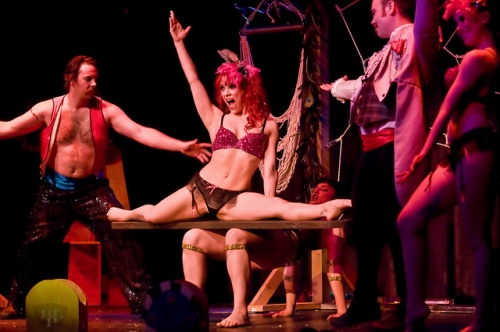 Photo of Sex At The Circus Burlesque by Brendan Lally.

Whiskey understands why some feminists are uncomfortable with yet another medium that requires women to take it off, jewel-encrusted thongs and pasties notwithstanding.

However, she also thinks that people who feel averse to the idea might not be looking at the big picture.

“You can't possibly imagine how powerful and in touch with themselves a performer becomes when they're on stage unless you've felt it,” Whiskey insisted. “And that's what we are: performers. We're dancers, actors and comedians rolled in to one. The majority of our audience sees art when they're watching a show, not ‘stripping’.”

Yet, Dare responded to the concern that burlesque can adversely affect feminism differently than Whiskey. For one, she acknowledged that the art form in Vancouver has become capitalist.

“Performers as well as producers have to do what audiences want in order to make money, which can lead them to fall into ideals [that are] marketable,” Dare wrote.

She also said that we live in a patriarchy, and that, “Women dancing on stage naked can be taken as objectifying.”

Laurie Penny of The Guardian is an ex-burlesque performer, and she has written about her experiences on the bump 'n' grind circuit many times before. In a 2009 article, “Burlesque laid bare,” she confesses that the burlesque world made her feel anything but in touch with herself.

The burlesque striptease makes explicit what push-up-bras and sticky lipgloss only promise: a passive, faux-naive, peek-a-boo sexuality that has little to do with real female pleasure and everything to do with mimicking whatever we are told is “sexy”. Sexual explicitness does no harm to young women if it is ­combined with honesty, but burlesque has little to do with sexual honesty. It is part and parcel of the packaging of female desire, a process by which young women trade in their sexuality and their selfhood for whatever fleeting power they can grasp.

The article also explained how burlesque has steadily shaken off its antecedent political objectives, like so much gold body glitter. While in the 19th-century it was a form of theatre the working classes used to parody the cultural hang-ups of high society — women dressing up as men, for instance — decades later, women's bodies are now used to “help sell the art form to dwindling audiences.”

Media, please: stop pitting Jennifer Aniston against Angelina Jolie in a "race to the altar"

BC woman files complaint against Enbridge for misleading promotional videos

Coop radio show "The F Word" on Bill C-38, the state of feminism in Canada

Surrey's Rakhi project: “Banding Together Against Domestic Violence” or against Indian culture?