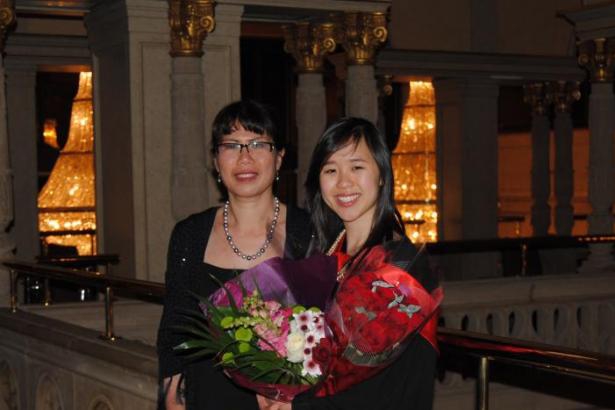 When I was younger, I swore that I would never grow up to be like my mother. Unlike my cousin who wanted to grow up to be like her mother -- a brilliant doctor inundated with piles of research and work -- I would often rant to my father as he drove me to math or swimming lessons:

“Daddy, I'm never going to be like Mom! I'm going to let my children be free!”

My father would always respond: “Don't worry Michelle, you're going to make your kids do even more,” to which I would retort with a pout. With her stringent rules and the structured schedule that I lived throughout my formative elementary years, I resented the push and craved the lack of pressures that my fellow classmates had.

Now that I'm in university, this is my first year being away from home on Mother's Day. This is my first year being away from my mother. Living with the bipolar weather of the east coast, I suppose my mother is living her 'Canadian Dream' vicariously through me. I have the privilege of attending one of the best liberal arts colleges in the US and my mother often calls me to tell me how happy she is for me and to remember that all I have to do is “eat, study and sleep.”

When I relate Mother's Day events to the classroom, I see a strong correlation during the elementary years that drops off a tad during the high school years and then spikes again during university. During elementary school, there wasn't a woman left uncared for by the teachers. We had art sessions specifically for every second sunday of May. From colorful macaroni tins sprayed painted in a metallic gold to praiseful collections of poetry written in sparkly gel pens, women were being thanked. I often wondered to myself how Mother's Day felt for my best friend, who had lost her mother to cancer when she was only a baby. Her artwork was bestowed upon her Aunt or her Grandmother.

As we were initiated as young adults in high school, Mother's Day wasn't the 'it' thing anymore. Rarely did I hear discussion about what students were doing for their mothers and I no longer lay in bed jittery with anticipation to see my mother's expression when she woke up and opened my gift. Gone were the hand-made trinkets replaced by gifts bought by my new capital gain.

Gradually, after many tearful fights and strained relationships during those two years, our relationship took a turn in fortunes and my mother retreated and I blossomed. My mother became my ally. I went back to making hand-made gifts – albeit more sophisticated. It evolved from tissue paper flowers to oil-painted portraits of my mother's petunia and lavender plants in her ever-flourishing garden.

Being away from my mother has offered me time to do some reflection on her impact on my life and my impact on hers. Now that I have this spatial distance between us, I look back to see that my mother was my largest supporter throughout my life thus far. She didn't show her affection through affection, but chose to display her love for her children in a more cutting-edge fashion.

The woman was unafraid of adversity and expressing her opinion – to the point of being overly blatant at points. My mother is the canonical depiction of what I hope I can give if I ever have children, minus a few spanking episodes.

A dramatic escape from Vietnam

My mother is a stalwart soldier. She was a Russian literature and language major in Saigon, Vietnam before attempting to escape the country after the implementation of Communist rule. On her first attempt at escaping by boat, she was caught and jailed for a year under intolerable conditions.

She rarely glosses over this period of time in her life, but there were rare occasions when my parents would linger at our marble table after dinner to reminisce upon those unspoken days. Over a porcelain cup of fragrant jasmine tea imported from Vietnam, my parents would divulge into the intimate details of their escape.

My mother, a very strong-headed woman, decided to escape for a second time despite her first setback.

This time she succeeded. Twenty-three years later during a trip to Los Angeles, California, my second-cousin described how my Grandfather had frantically run to his home, breathless, yelling: “Help me! Help me bring Loan home. She is gone.”