Unhappy Birthdays, Part 2: The politics of "birth rape" and mothers with PTSD 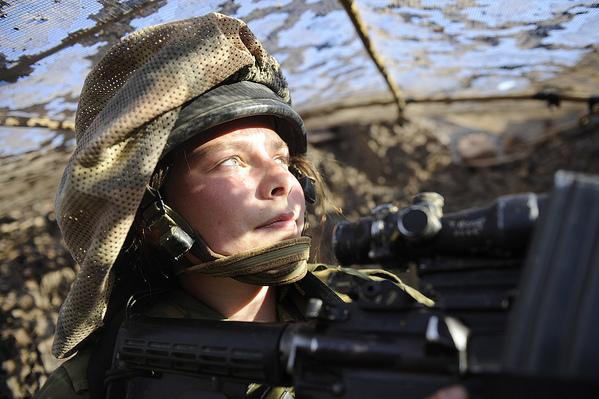 Photo of a female soldier by the Israel Defense Forces on Flickr.

Part 2 of a series on traumatic birthing experiences. Read Part 1, Why more mothers are saying they were “birth raped”.

The trauma that mothers feel after experiences like Kalina Christoff's occurs because women feel “like birth and interventions are happening to  them rather than feeling like they are making truly informed choices,” as Jessica Austin, a Vancouver birth doula and owner of Birth Takes A Village, puts it.

“Mothers often describe 'informed consent'—the caregiver's obligation to provide patients with as much information about a procedure as possible, before the patient consents to it—as feeling more like bullying than informing,” Austin said.

“Women are not allowed to play an active role in their maternal health care.”

These feelings of powerlessness are so great, that recent studies show that mothers suffer levels of Post-Traumatic Stress Disorder at the same rate as Canadian soldiers who have fought at war.

A 2002 Canadian Community Health Survey on the Canadian Forces reports that 4.7 per cent of soldiers who have been deployed three or more times suffer symptoms of PTSD, and 2.8 per cent of the forces overall.

According to Vancouver Birth Trauma, about 30 per cent of women are traumatized during childbirth and two to six per cent go on to develop PTSD.

“In other words, women nowadays are as likely to develop PTSD from giving birth as modern solders are from military combat,” says the group website.

Jesusa Ricoy-Olariaga, a maternity activist, childbirth educator and doula who started the Revolution of Roses—a campaign to end obstetric violence against women—concurred with Austin on why trauma results from the events some women call "birth rape."

“It’s traumatic because of the lack of control of the person who is experiencing it. The mark that is left in your body and mind are painful ones,” she said over the phone, from her home in London. “These women find themselves with a baby, but alone with pain: physical, mental or sometimes both.”

“And let’s not forget, it’s supposed to be the welcoming of their child—so the trauma will forever be linked.”

Solace for Mothers is an internet forum for women who have gone through birth trauma moderated by Jennifer Zimmerman. On it, some women have commented that although they are healing, the birthday parties of their children—what are supposed to be celebrations of the lives of their daughters and sons—are hard to enjoy.

Of course, these birthdays are also the anniversaries of events that left them scarred—figuratively, and often literally.

Over the past couple of years, much of the discussion around birth rape is not about patients’ rights or women’s rights—it’s about the right to use the triggering term of “rape” at all.

“When we suffer pain and someone compares it to another's pain, it can be quite challenging—like, ‘How do you dare compare it?’” said Ricoy-Olariaga.

And yet, through the helpline she operates, Ricoy-Olariaga said she has heard the word rape from every caller.

“I can imagine that survivors of rape crimes might feel marginalized if that term is used too often,” said a trauma survivor who wished to remain anonymous. When she gave birth in 2009, her doctors ignored her requests, deferring instead to her husband for decisions, and hurt her body so badly during delivery that she still deals with related health problems today.

“But I will say that after my trauma and having to be examined over and over by health professionals, some of whom were less than empathetic, my body began to function much like someone who has been raped,” she said. 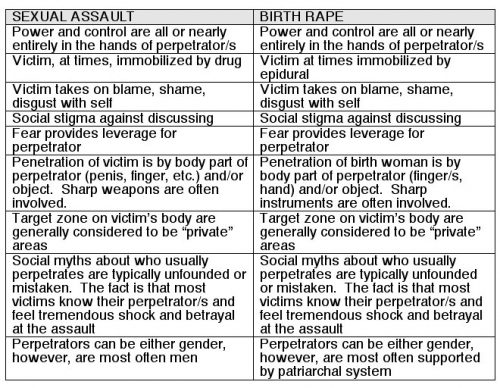 From Zimmerman's blog post “What Feminists Should Know About Birth Rape”.

Christoff agreed. “People disagree that [birthrape] is sexual—I think that's where people end up being heated. But the way I felt was that it was a sexual thing. It deals with your sexual organs.”

“We should be careful not to pit survivors against each other,” commented Irene Tsepnopoulos-Elhaimer, media contact for WAVAW—the Vancouver-based Women Against Violence Against Women Rape Crisis Centre.

“The people that should be concerned about naming obstetric violence birth rape should be the perpetrators. Women get to define their experience.”

In Zimmerman’s aforementioned blog post, she argues the same, elaborating that many mothers have embraced the term because it fills a gap in the English vocabulary. They have few other epithets with which to identify their unique brand of pain.

And identifying, admitting the problem, is the first step to recovery—as well as to change.