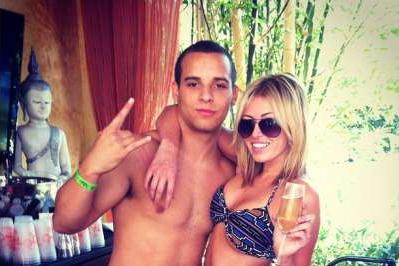 With one touch, an ordinary photo with friends can turn into a professionally lit photo ready to print in the hottest fashion magazine. With another touch, those images can be uploaded online for the world to see.

With photo-editing tools such as Instagram, Paulina Gretzky made her return online by posting yet another set of scandalous photos. After being pulled from Twitter due to a negative response from her father, Wayne Gretzky, the 23-year-old actress/singer/model has once again created controversy over the photos involving bikinis, alcohol and partying.

Celebrities have embraced social media as a way to fight back against negative paparazzi claims. Lady Gaga, Justin Bieber and Kim Kardashian post pictures online via Twitter to allow fans a more intimate view into their lifestyle and upcoming projects.

Most recently, the Instagram app has become quite popular for young celebrities, iPod, iPhone and Andriod phone users. The app has even caught the attention of Facebook, as Mark Zuckerberg and his team recently acquired Instagram for $1 billion.

Instagram allows users to capture moments in time and modify them to their liking. Self-portraits can show up with a natural Insta-tan, thanks to the “Toaster” filter that adds just the right tint of orange to the image. Other photo filters such as “X-pre II” and “1977” connect adults back to their first Polariod or Kodak camera. With Instagram, users’ youth could be captured with a timeless feel, creating a distorted nostalgia about the special moments of young adult life.

For girls with access to social media and any photo-taking device, social media is their way of presenting themselves to the world: they hunger to be seen and heard by the world. However, the obsession with managing their "image" seems to overshadow the potential for finding their voice.

Posting pictures online triumphs political comments or opinions because it is both quick and easy, and so are the responses. Social media outlets promote fast updates and accessible information – Twitter won’t allow you to post anything longer than 140 characters.

Social media presence is limited to seconds. As a female university student, I recognize that using social media to connect and update friends and family should be fun. Students often simply want to take a break from their studies and unwind on twitter or Instagram. Nobody wants to hear a long, detailed summary of your women’s studies tutorial discussion that day: the online community is more interested in knowing what cute clothes you were wearing and who you hung out with at the bar.

But this over-emphasis of images over words in online interaction carries shades of the Victorian era concept of women as people only to be seen and not heard. When a girl posts sexy pics of herself on Instagram, she attracts instant attention -- if not envy -- from her peers: if she invests her time in crafting thoughtful essays online, meanwhile, these are more likely to be ignored. This reinforces the importance of superficial appearances, rather than substance.

And what do all these photographs say, really? Paulina Gretzky’s Instagram and twitter photos reveal a fit body, good-looking friends, and a fun time. Her life? It must be awesome: that's all that can be gleaned by the photos she uploads. But Gretzky's glamorous pics don't reveal what's really going on in her thoughts, and that's what's what leaves the picture incomplete for many social media users.