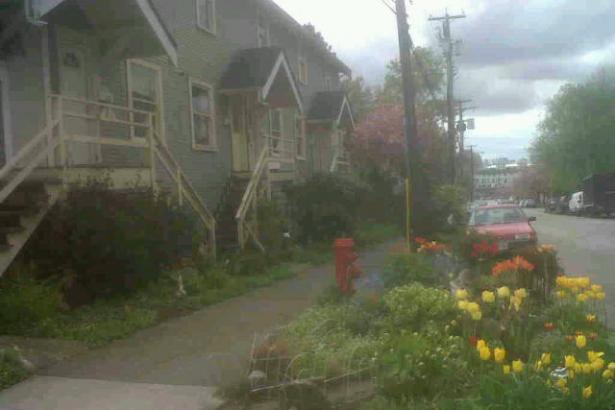 This has been the worst six months of my life.

I came home from my summer holidays to discover a "For Sale" sign outside our row housing complex. Now, I have lived here for almost 33 years, more than half my life. How did that happen?

I drove up the street to finally see Richard Tetrault painting the longest mural in Vancouver on the wall at the end of the street. I have been trying to make that happen for 32 years, so I was really happy. I walked into the house really excited, but then I heard the news and my ecstasy turned to agony. I was going to lose my home just before an election. 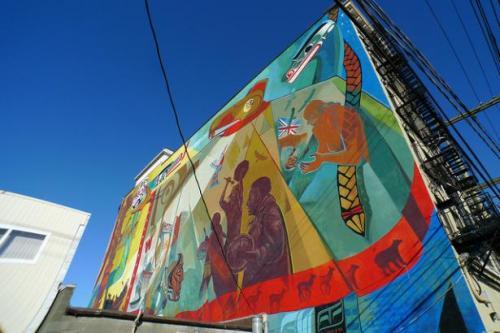 Photo of Richard Tetrault mural by Jason Vanderhill on Flickr

Well, not quite. The election came and went, and I did lose the election but I didn’t lose my home, not then—though many of you heard the rumors. What happened was it didn’t sell until December. In January, we met the new owners, who wanted some post-dated cheques but said they hadn’t decided, or weren’t going to tell us, what they were planning to do with the place.

Did I tell you I had tried to rally some friends to buy it, but in the midst of the election chaos we couldn’t pull it together, even though Veda Hille was interested?

Needless to say, I was a bit of a wreck after losing the election, so I was glad they didn’t know what they wanted to do. Everyone was asking me what was happening to my housing situation, and telling me that I had to start looking for another place to live.

On top of that, my aunt died and my only niece became deathly ill. She still is. So I didn’t really want to look for a new home—I just wanted to crawl under my bed and hide. Surely, nothing more could happen if I laid low.

No problem, I thought, and took the car to ICBC. They took a look at the bumpers and said my lovely red 1992 Ford had to be junked. Ugh. My mechanic Steve may have saved the day on that one, but I'll find out next week. After all, it's not environmentally okay to just junk old cars that still work.

Where was I... Oh yes, I was supposed to be looking for a new home.

We started by applying for coop housing, as I am a cooperative kind of person. I went to the BC Cooperative Housing Federation website and found a few that had open lists. My partner and I submitted our applications and our cheques and waited.

Actually, we are still waiting, four months later. Our cheques were cashed, but we received not even one call back. Luckily, a coop we heard about from a friend called this week instead, and we will have an interview on Sunday to decide if they will put us on their ten-year wait list.

My partner, at this point, is ready to head to the country. Who can blame her?

I finally decided to check out Craigslist and Kijiji. I had some hope, and a list of what we wanted and needed: a sunny, spacious and affordable—around $1,200—two-bedroom place with a porch and a garden. My partner really wanted someplace quiet. We did think about buying, but after looking at one lovely condo in a very moldy building that sold the day it went on the market, we realized that we are both living on our savings and couldn’t afford one anyway. So, that idea was taken off the drawing board.

Then we thought that we would put an ad on Craigslist, as any landlord would jump at the chance to house us. I haven’t missed a rent payment in 32 years, we keep our place clean (in fact, we take out our neighbour’s garbage, as they aren’t quite as clean), J is an incredible gardener and we get along well with everyone on our block.

However, we are still looking. This week, the new landlord started tearing apart the two empty units on either side of us. He still hasn’t told us what his plans are for the place, nor has he requested any permits from the city. It is pretty noisy right now, but I look out the front window at our gardens—“we” are Green Street gardeners.

The bulge is full of red and yellow tulips with a blue stream of violets weaving through it. The round-about is shimmering with pink heather and spotted with white hyacinths. The front and side of our building are just about ready to burst into colour.

We really don’t want to move, but we keep looking around, discouraged by reports from friends who are looking as well. Some friends are leaving in July for jobs and a home in Winnipeg.

A Prime Minister who spends over $25 billion per year of our hard-earned tax payer’s money on the “Defense” of Canada could make better use of our money—maybe, on a National Housing Program. Did you know that we are the only G8 country that doesn’t have one?

You might remind him the next time you see him. I sure will.

In the meantime, my partner and I will keep looking around. I'm sure glad the sun just came out. But I wish those guys next door would keep the hammering down.

BC's new home ownership measures helpful, but not for everyone