At SFU's Goldcorp Centre for the Arts, a panel discussion followed the screening of documentary Miss Representation.  The film, presented by Projecting Change film festival and Girl Gang, examined the ongoing "misrepresentation" of women in mainstream media and its damaging impact on young women. A distinguished group of media specialists spoke on the issue of women in media at a panel discussion, moderated by UBC journalism professor Mary-Lynn Young.

Vancouver Observer founder and publisher Linda Solomon spoke of her experiences as one of the rare women in executive positions in the media, and how watching Miss Representation with staff opened her eyes to the way that media shapes public perceptions and attitudes about women.

Speaking of VO's celebrity blog TMI -- which focused primarily on gossip about celebrities, their relationships and wardrobes -- Solomon said she realized how such content was unhelpful to the fight for gender equality in the media and brainstormed with her team on how to approach popular culture in a more interesting and meaningful way.

"The film made me wake up to the fact that participating in mindless celebrity gossip  is not worth it, even if it brings us traffic," she said, noting the shift in tone of pop culture coverage on The Vancouver Observer since.

"We began to do more critical pieces. We can have more impact on the conversation by sympathizing with Angelina Jolie regarding her abuse by the tabloids and questioning what it says about us as a culture, or by asking a star of The Hunger Games if the movie promotes violence rather than a lightweight question of some sort.  We want to entertain our readers, but also we want  to provoke reflection and awareness."

"The movie also inspired us to work with a group of studenets from University of Toronto to launch a new blog, Feminista, where we will be taking a critical look at how women are portrayed in the media, and about power and gender in the city."

Aerlyn Weissman in a photo by Jenny Uechi

“Women need to tell our stories. Our voices need to be out there."  Filmmaker Aerlyn Weissman's powerful voice resonated through the  theatre.

"We're appalled at the idea that the Taliban forbid women from singing in public. We're appalled at the idea that (authorities) are starting to take women off of billboards in Israel because religious fundamentalists don't want to see them in the public space. But the same thing is happening, essentially, with the market forces here -- we are being erased from our own culture."

Weissman, an award-winning location sound recordist as well as film director, spoke about the pervasive myth of gender equality in the workplace for women in media.

"There's this myth: that 'anyone can work here, it's based on merit,'" she said, referring to the many digital and social media companies in Vancouver. Despite the theory that "anyone" can work in these companies, Weissman observes that many of them are dominated by men ("white men" in particular) because of the work culture tends to be forbidding toward women, especially those with children or elderly parents to care for.

"When women don't do well in these situations, they blame themselves rather than anything systemic," Weissman noted. 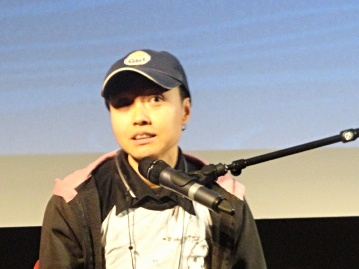 Desiree Lim in a photo by Jenny Uechi

Sergio Toporek in a photo by Jenny Uechi

Sergio Toporek, a digital media artist, designer and academic, highlighted the obstacles facing those who wish to challenge the perception and role of women in media.

"It goes all the way back to the Renaissance," he said. "Every representation of women has been commissioned, created, curated and paid for by men. I think, when we look back at history, we realize what an uphill battle this is to change this."

Andrea Warner in a photo by Jenny Uechi

Music journalist Andrea Warner weighed in on how people in the media can help change the discourse surrounding women. Describing how she advocated for women to be put on the cover of her publication, she said that showing women in a smart, non-sexualized way was also empowering for the average reader.

"Who's goint to defend our reader -- who I think is someone like me -- rather than just the casual passer-by who sees boobs (on the cover) and grabs them?" she asked.

She recalled liveblogging with fellow music journalists for CBC during this year's Grammy awards, and how she reacted when pop star Chris Brown began performing: Brown had been arrested for beating his girlfriend and fellow pop singer Rihanna, but was back at the top of the music charts.

"A lot of us journalists in live chat were having this debate: we're turning the television off, or muting it, or we'll talk about domestic abuse for the whole four minutes that Chris Brown is performing. And that's what we did."

Political analyst Diamond Isinger in a photo by Jenny Uechi

Political analyst Diamond Isinger spoke about the media's unfair representation of women in politics, using words such as "Mean Girls" and "cat fights" whenever two women in politics were up against each other.

"Consumers of media have to speak up about it. When women in media are respected, they make better policy," she said.  "They can focus on policy and not on the ridiculous media story of the day about them." One "ridiculous" story, she said, was a recent local television show in which BC Premier Christy Clark's stylist was interviewed about her clothing, and people analyzed what signals her outfits may be sending the public about her life.

Visit the websites for more information on Miss Representation and Girl Gang.  Write for Feminista.

How to guarantee gender equality in politics