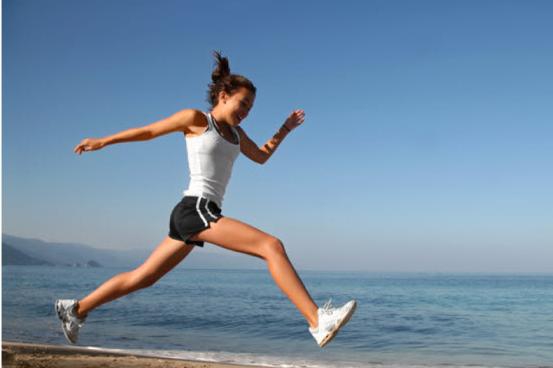 Here's the truth about thighs: thinner doesn't mean better.  Or healthier.  According to a recent study in Denmark, women with legs smaller than 22 inches in circumference are at risk for heart complications and premature death. After spending the past decade tracking thigh sizes, as well as the health of 3,000 subjects, they concluded that less muscle in the thighs increases sugar in the bloodstream. Higher blood sugar sends signals to the brain to store more abdominal fat, fat which is directly related to heart complications.

Yet when it comes to legs and thighs, fashion magazines blast the message that thin's in. Girls look up to stick-thin models, many of whom are increasingly digitally altered to look amazing beyond belief, so amazing a critical eye realizes they're too good to be real. But many young girls and women still try to get their bodies to look like supermodels in the magazines.

The notion that “nothing tastes as good as skinny feels” (a motto by British model Kate Moss) rings true for too many women. In a world still polluted by masked gender inequalities, it often seems that the easiest way to gain power and control in society is over ones' own body. But a thin figure doesn't necessarily mean that a woman has power over the body, even though staying thin is difficult.

Popular social media outlets fuel self-branding.  And photo-sharing tools such as Facebook and Instagram allow us to post profiles that can represent more who we want to be than who we really are.

Even when research reveals potential health risks of society's so-called “perfect body” -- skinny thighs and  hips -- many intelligent young women are willing to sacrifice health for a false sense of self-assurance rooted in thinness. Charlotte Seddon, a 17-year-old British girl, recently died after a four-year battle with anorexia: despite achieving the top test results in her school and being active in the community. Her body image issues cut her life short.

How do we shift popular culture so that the images we see make us think more about how much we can experience, learn, contribute, and achieve than how much we weigh?

Note: For a critical look at the way media representation shapes women's self-image, catch the screening of Miss Representation at 4 p.m. on April 21 at the Goldcorp Centre for the Arts (149 West Hastings Street).

Kicking addiction: allowing discomfort is the secret to successful recovery