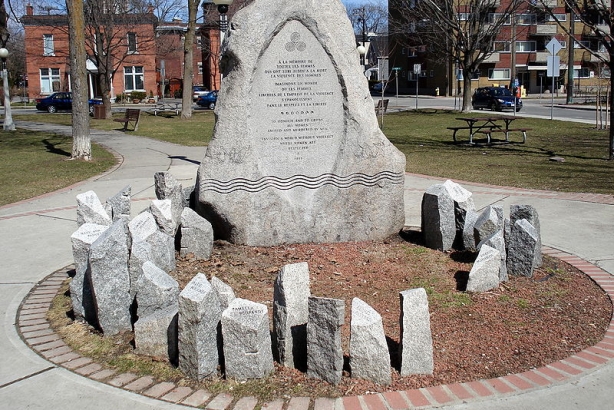 Above image of École Polytechnique memorial from Wikimedia Commons, as well as the insets.

Women of Canada: you know the 1989 Montreal Massacre, the École Polytechnique shooting that killed 14 women and injured 14 others? The tragedy this country memorialized all yesterday as the inspiration for our National Day of Remembrance and Action on Violence Against Women?

Well, stop being so self-absorbed. That had nothing to do with you, so you can shut it with all the “misogyny” and “gendercide” stuff.

That’s the basic message of Jonathan Kay’s National Post article on the issue, rather uniquely titled, “For the 23rd anniversary of the École Polytechnique massacre, Amish lessons in mourning”.

In his article, Kay ponders why the school shooting is remembered as a gesture of anti-feminist violence, viewing such treatment of the massacre as an insensitive politicization of an, in his opinion, apolitical event.

As he wrote in the Post, “I think Barbara Frum had it right when she asked, on CBC’s The Journal: ‘Why do we diminish [the act] by suggesting that it was an act against just one group?’”

Gee, might it have something to do with the perpetrator’s own admittance that he was “fighting feminism”, and the fact that he screamed "I hate feminists" before opening fire? Might it have to do with the suicide note he left behind, which condemned women as responsible for ruining his life?

Here's the event as Kay describes it:

“Twenty-three years ago, on December 6, 1989, Marc Lépine walked into École Polytechnique and shot 28 people, killing 14 of them, and then himself.”

What Kay doesn't bother mentioning is that Lépine did not just kill 14 “people”. He specifically directed the fifty or so men in the classroom to leave, sparing their lives, because he saw worth only in theirs.

It is also a mystery why Kay believes that treating a misogynistic murder rampage as such is somehow “diminishing” of the tragedy. Could it be that violence against women is less important than violence against men, in his (and Barbara Frum’s) eyes? 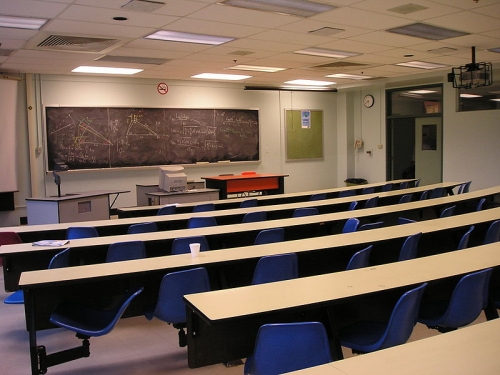 Kay continued in his article:

Like other school shooters, [Marc] Lépine presented his motives to the world in a way that he imagined gave them some sort of larger political coherence. But the more obvious explanation is that — like Aurora, Co. movie-theatre shooter James Holmes, and many other mass shooters — Lépine was simply insane.

As with Holmes, the Dark Knight shooter, there likely was no larger social or political message at play — it was just a horrible tragedy that symbolizes nothing more than our inability to prevent bad things from happening to good people. That inability is frustrating and tragic. But it’s been part of the human condition forever, and will continue to be such forevermore.

Canada’s gay and lesbian newspaper: poor job in representing L's in its name