Jessica Kay
Aug 21st, 2009
Share on Facebook Share on Twitter
Get ready for the end of the Y chromosome. It's the weakest link.
by Jessica Kay
Okay, ladies, what I’m about to tell you, you should keep to yourselves. Do not; I repeat do not share this sensitive information with your husbands, boyfriends, brothers or fathers. And, gentlemen, I warn you that what I’m about to discuss may traumatize your delicate nature (ego). I urge you to look away from your computer then close your browser at once! You have been warned.

The nature of this topic is sensitive only because it involves the demise of our heroic counterpart. That’s right ladies and germs…. the male species is a dying breed.

Of course this has many implications, involves many questions and ultimately distorts the basis of our comfy reality. The white knights we dreamed of, as young girls will become the Joan of Arcs. But don’t worry, we can safely enjoy male companionship up until the end of our lives … and our daughters will be okay too. In fact our daughters, and their daughters, and so on, will enjoy male companionship for approximately another 5000 generations – give or take. 5000 generations is roughly 125, 000 years.

125, 000 years is the figure estimated by one of the world’s preeminent geneticists Mr. Bryan Sykes. In his book, Adam’s Curse: A Future Without Men, Mr. Sykes explains at length the complexity of the demise of the Y chromosome. A little background on the Y chromosome: it contains 86 genes, and one of those genes is responsible for turning the female embryo into a male. Without the function of this gene, the embryo would develop into a female with XY chromosomes and would be unable to reproduce. This particular phenomenon is called Androgen Insensitivity Syndrome. The complete state of AIS in male humans is 1 in 20, 000.

It would appear that Mr. Y was set up from the start. So, those of you who are believers, you better believe that the Lord, your god, has given XY a spiteful little parting gift and has given XX the gift of eternal life and good genes! Hallelujah! Anyway, I digress…getting back.

Currently, male infertility from genetic mutations accounts for 1-2% of all male infertility cases. But some specialists have a solution to that problem. In the multi-billion dollar industry of reproductive technology, “doctors” have found a way to over come nature’s twisted little game. Or, can they?

Certainly if they want to alleviate the emotional pain of a male suffering from infertility resulting from their genetic defectiveness, they of course can. But only at the cost of potentially speeding up the demise of the Y chromosome.

Fertility specialists helping these males with this specific type of infertility use a reproductive procedure called Intra-Cellular Sperm Injection (ICSR). ICRS uses a needle to insert the sperm into the egg, and voila! There is a baby.

Here is the bad news. One of the problems with this procedure, according to Sykes, is this particular reproductive technology might take a genetically defective Y chromosome and create a male baby who in turn will become infertile upon sexual maturation.

All the father has done is passed along his defective Y chromosome. This next generation of male human will need to use ICSR if he desires to have children. And of course his male children after that will face the same issue.

So now of course you must be wondering a couple of things like: Are we all going to be lesbians? What about the X chromosomes, (females have two!)? Well, before I answer the first question, Mr. Sykes has assured that us females are good to go! The X chromosome has 1500 genes and does not suffer from the same sort of mutation problems that will eventually cause the extinction of the Y chromosome.

Good news. Our species will survive after all! Kind of ironic though isn’t it? For years, women have been told we’re the inferior sex; we’re the weaker sex. When all along our genes turn out to be superior.

Wow, what a discovery – and a discovery you might want to keep to yourself unless you feel like emasculating your male companion. Ahem…. Anyway, getting back to the first question. The one about us all being lesbians in roughly 125, 000 years. That one I cannot answer. I mean, I’m sure by time 125, 000 years, (could be more could be less), have passed, we humans will likely look and behave very different from how we do today. As our environment changes, so do we via the process of natural selection.

There are scientists out there right now developing a reproductive technology that does not use fertilization to produce an embryo. It’s called Parthenogenesis and is a form of asexual reproduction, which happens to occur naturally in some insects, plants and vertebrates. In 2004, scientists took a nucleus from two females and combined them. It’s a little complicated and not perfected, yet. The Japanese however, have produced a mouse using this process. But, it took 460 tries to attain their genetically modified mouse.

If you care to read a more thorough and scientific explanation of this topic, pick up Adam’s Curse: A Future Without Men. Just make sure you’re discreet! You can find it here on Amazon: http://www.amazon.ca/Adams-Curse-Future-without-Men/dp/0393058964 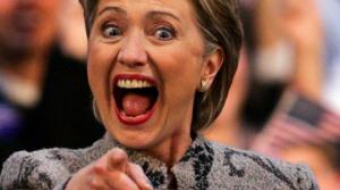 On June 7, 2008 Hillary Clinton conceded defeat as the Democratic nominee for president. In her concession speech she stated that although, "we weren't able to shatter that highest, hardest glass...
Jessica KayNov 27th, 2009

Beauty and the Botox Beast

During my last Botox injection I had a brief conversation with my dermatologist on its long-term effects. Not about the long-term affects on our bodies, but specifically the consequences these types...
Jessica KaySep 1st, 2009
Speak up about this article on Facebook or Twitter. Do this by liking Vancouver Observer on Facebook or following us @Vanobserver on Twitter. We'd love to hear from you.