What is health? According to the 1946 WHO constitution it is “a state of complete physical, mental and social well-being and not merely the absence of disease or infirmity.” Today this definition is widely accepted, as is the notion that, in addition to its biomedical and technical elements, we should be concerned with the broader social determinants of health as shaped by the distribution of money, power and resources at global, national and local levels. This broadened understanding of and approach to health reflects increased awareness that health issues are affected by factors traditionally considered outside the health sector. Globalization and the proliferation of non-governmental actors and institutions (public and private) strongly influence the ability of national and local authorities to protect and promote public health, but profound health disparities exist across the globe. Situating health within the context of broader social determinants provides a better understanding of the sources of health inequities.

The absence of equity in the provision of health services is considered to be one of the major impediments to achieving positive health outcomes. The WHO’s 1998 World Health Report Health for All in the 21st Century, linked good health to the advancement of human rights, greater equity, and gender equality among other things. Social determinant of health generate health inequalities. An emphasis on health equity implies that need -- not income/wealth, power and privilege -- should be the major determinant of health-care access and ultimately of health outcomes. This notion was embodied in the 1978 Alma Ata Declaration. However, the profound disparities in health opportunities and outcomes across the world today, indicate quite a divergence between recognizing a ‘right to health’ in principle and in practice.

There is a stark relationship between poverty and poor health -- in countries classified as ‘least developed’ or ‘low income’, life expectancy is just 49 years, and one in ten children do not reach their first birthday. In high-income countries, by contrast, the average life expectancy is 77 years and the infant mortality rate is six per 1000 live births. There appears to be a ‘vicious cycle’ in the relationship between poverty and ill health -- poverty contributes to ill-health and ill-health leads to poverty.  A recent report by the WHO and World Bank Dying for Change: Poor People’s Experience of Health and Ill-Health, notes that poverty creates ill-health because poor people tend to live in environments that make them sick, without decent shelter, clean water or adequate sanitation. It is within this context that the deprivations, exclusions and inequities associated with poverty and inequality have been highlighted as one of the biggest obstacles to promoting health globally.

The goal of achieving more equitable healthcare around the world faces serious challenges. As the WHO itself acknowledges, while there have been improvements in areas such as childhood immunization, there have been setbacks to providing equitable access to essential health care worldwide. Health system constraints including financial barriers and health worker shortages, combined with challenges such as the HIV epidemic, have hampered progress towards achieving health for all. In the 30 plus years since the Alma Ata Declaration, the equity and community-based (bottom-up) emphasis it espoused has been eroded in favour of ‘efficiency’ cost-utility (top-down) reforms based on neoliberal market economic principles (the so-called ‘Washington Consensus’ favouring privatization, deregulation, etc). User fees, cost recovery, private health insurance, and public–private partnership became the focus for healthcare service delivery.  Overall, healthcare was seen in terms of economic benefits that improved health delivers (i.e., human capital for development), rather than as a consequence and fruit of development.

Aids warning sign as part of a USAID campaign with the Ghana police (photo: Shaheen Nanji) 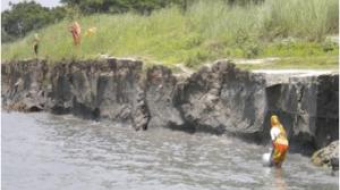