Why Canadians should care about pipeline protests at the White House 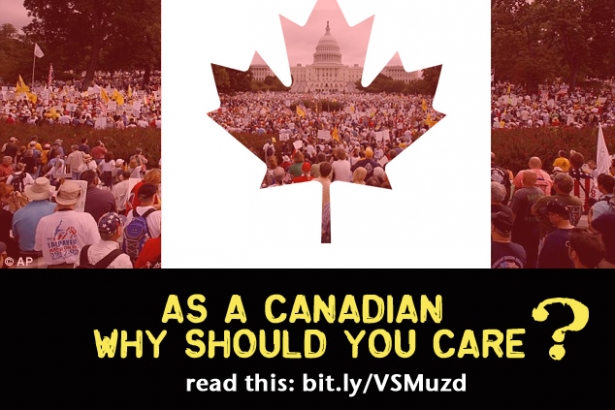 This weekend, thousands of people will be out front of Barack Obama's White House to protest the construction of the Keystone XL pipeline -- a 1,879 kilometer length of pipe that will allow oil to be pumped all the way from Northern Alberta to refineries in Texas.

It isn't the XL pipeline itself that is at the heart of the matter though. It is the 500,00 barrels of Canadian tar sand oil that will be pumped through the pipe that has so many Americans upset. And it should upset Canadians too.

For years Canada was known as one of the world's leading environmental stewards. While a small player, Canada is known for its skills in diplomacy, and was key in the ratification of international environmental treaties like the Rio Earth Summit, the Kyoto protocol on climate pollution reduction and, of course, the Montreal Protocol to reduce acid rain and close the hole in the ozone layer.

For the most part, our country has been very good at striking a balance between the financial bottom line and the long term health of our environment and the people living in it. But that has all changed in a very short amount of time, with the rapid expansion of Alberta's tar sands operations and a federal government that sees economic concerns superseding human health and the livability of the environment around us.

Now that has all come to a head and Canada finds itself in the center of one of the biggest controversies on the planet, with a major superpower at the center. The chickens have, so to speak, come home to roost for Prime Minister Harper and there is an opportunity to make a correction in the road that Canada is currently traveling down.

The battle over Keystone XL has been brewing for more than four years. With a final decision on Keystone expected from President Obama as soon as the next month or so, the situation has reached a fever pitch: on February 17th in front of the White House, if expectations hold true, we will witness the largest rally ever held in the U.S. on the issue of climate change. More than 20,000 people will gather in Washington D.C. to lobby for action on climate change and to pressure their president to disallow the construction of the Keystone XL pipeline.

These tens-of-thousands of everyday Americans, whether they know it or not, are protesting Canada as much as they are the Keystone project.

The question for Canadians in all this is not whether we pump tar sands oil down to the United States, but instead a much bigger question of what we want our country to be, and be known for by other people in other countries. In the name of fiscal prosperity at all expense, Stephen Harper's conservative government has decided that Canada will tether itself to the exponential development of the tar sands for decades to come.

Since the Conservative Party and Stephen Harper have taken power, our Canadian government walked away from the Kyoto protocol, when we were one of the first countries to sign it and motivated other countries to follow our lead. Our government fought against a plan by the G20 nations to reduce fossil fuel tax breaks to companies like ExxonMobil, the most profitable company in the history of companies.

Keystone XL oil pipeline to be defeated: is Enbridge next?