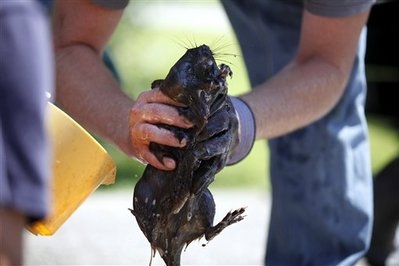 A volunteer tries to clean bitumen off a muskrat. Two years after a ruptured Enbridge pipeline spilled millions of gallons of Canadian bitumen into the Kalamazoo River, the EPA finds submerged oil pools that are mobile and could recontaminate the river during floods.

On October 3, the US Environmental Protection Agency issued a proposed order pursuant to the US Clean Water Act that would require Enbridge to clean up more of the oil spilled into the Kalamazoo River in Michigan. The spill occurred when an Enbridge pipeline ruptured in July, 2010 releasing millions of gallons of Canadian bitumen.

Significant pools of the heavy oil known as “dilbit” remain after two years of cleanup that ended in August. Large pools of submerged oil remain that could break loose during flood events, recontaminate parts of the river and spread the heavy oil to unpolluted reaches of the river system. The EPA focussed on extreme flood events because they are occurring with increased frequency due to climate change.

EPA scientists are also concerned that not much is known about environmental impacts of dilbit. Canadian bitumen is the texture of peanut butter until it is thinned with chemicals. When Pipeline 6B split open, the thinners evaporated and the bitumen sank to the river’s bottom.

“This kind of crude oil is a complex mix of hundreds of compounds—some known to be toxic—that has not been studied much” Steve Hamilton, one of the experts who worked on the EPA study, stated in a "Inside Climate News" story. “We just don’t understand the consequences well enough.”

The EPA concluded that “sheen management” with oil booms was sufficient for most sections of river that still had pools of oil, but dredging was the only solution for three areas that totalled 100 acres (75 foot ball fields). One area near Ceresco Dam had 5,500 cubic yards of oil-soaked sediment removed from the river bottom in 2010, enough to fill 27 semi-trailers, but oil globules are still floating to the top. A year long study of these areas found that submerged oil was mobile and migrating downstream.

“We never will get all the oil out [of the river]. It’s impossible,” Hamilton said.

A letter from Enbridge to the EPA sent in August stated that further recovery efforts would result in a negative net benefit to the river and should not be based on aesthetics relating to the presence of sheen.  The company suggested further study.

Enbridge has 30 days to respond to the proposed order. The additional work could take up to a year and add tens of millions of dollars to a cleanup that has already cost Enbridge $809 million dollars.