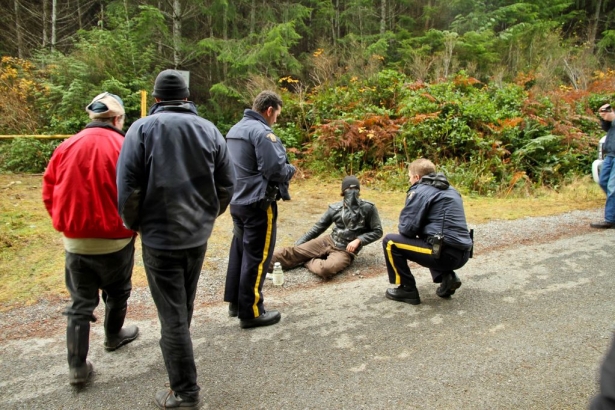 Island Timberlands brought a brush removal crew and security guards to the access road for one of the parcels it plans to log. 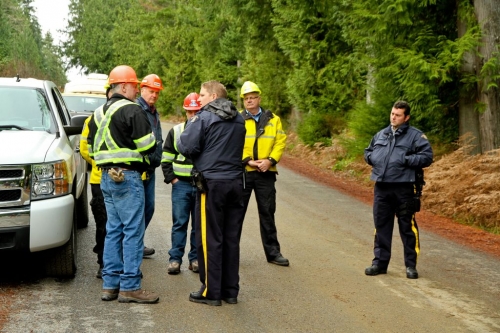 This morning on Cortes Island, Island Timberlands trucks were stopped at a yellow logging road gate by two masked protesters lying on the ground. Island Timberlands personnel filmed the protesters, presumably in preparation for an application for a civil injunction. According to a local source, they put their cameras close to the faces of the protesters and pushed them for an incriminating statement. The protesters did not respond and remained on the site until the end of the day. 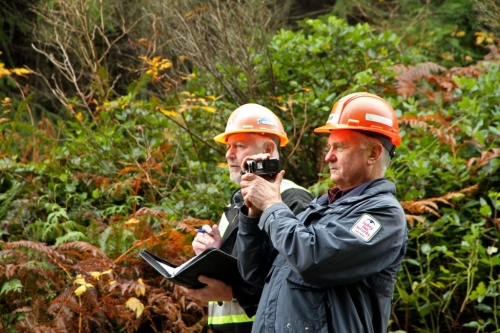 Adjacent landowners were among the community members present. One couple explained that they have a water licence on Basil Creek, and that Island Timberlands plans to log in the riparian area and within 30 feet of the wetland that feeds the creek. They wrote to Morgan Kennah, Island Timberland’s Manager for Community Affairs, stating their concerns about water supply and contamination.

“I thought I would get a letter from Morgan assuring me that my water supply would be safe,” the landowner stated, “but that never happened. I got no response.”

Another community member showed up with Christmas decorations and a Christmas tree to lighten the protesters’ spirits. 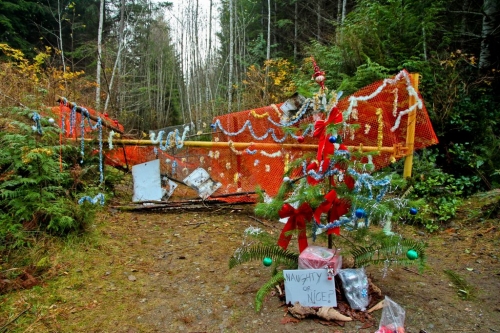 Leah Seltzer explained the islanders' situation in this way:

People are here because they want to make it known that the industrial forestry model doesn’t work for local communities and it doesn’t work for the province. Island Timberlands will destroy ecologically sensitive ecosystems and leave nothing beneficial in its wake. We will be left with devastated ecosystems, a contaminated water supply and no long term jobs. All the benefit is going to people who live far away and who aren’t aware of the cost of their profits to our community and our province.

Sign up here for Vancouver Observer e-alerts and stay on top of issues that matter. 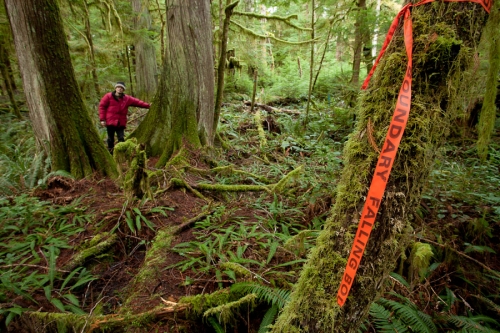 Will Brookfield Asset Management trash a beloved B.C. forest for cash? Tune in to MTV's Buried Life tonight to find out. (VIDEO)

Cortes Island, B.C., the jewel of the Georgia Straight