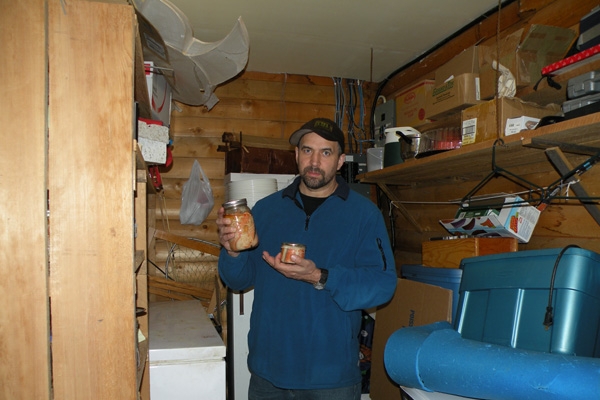 Todd White, like most members of the Haida Nation, harvests and preserves sea food to eat through the winter months.

Hearings on the Enbridge Northern Gateway Pipeline will be held in Haida Gwaii February 28 and 29, and the Joint Review Panel must expect some tough opposition. Supertankers servicing the proposed Enbridge Pipeline would either go north around Haida Gwaii, past Rose Spit and the food productive ecosystems that people in Massett and Old Massett literally depend on to survive, or south around Gwaii Haanas National Park and Haida Heritage Site and Marine Conservation Area Reserve. Gwaii Haanas (which means “Place of Wonder”) is home to Ninstints Village, a UNESCO World Heritage Site due to its many standing totem poles.

If 225 tankers were to carry 318 million liters through Hecate Straight each year as proposed, they would ply some of the riskiest waters in the world. Hecate Straight runs to a depth of 200-400 meters, getting shallower to the north.

Such shallow waters create steep waves that are difficult to navigate. During the winter months, a low pressure system causes a succession of storms with heavy precipitation and gale force winds. In fact, the Cape St. James weather station at the southern tip of the Haida Gwaii has recorded the strongest winds in Canada.

Scientists and insurance companies expect the oceans to become increasingly dangerous as a result of climate change. In recent years, vessel losses due to weather have risen by more than 10 per cent. In The Wave, Susan Casey recounts the winter of ’97-98, a particularly stormy season during which 27 bulk carriers were lost within four months.

“Oil tankers slipped from the radar, leaving only black slicks to show they’d ever existed,” she writes. In addition to storms due to more wind energy in the atmosphere, the Pacific Northwest generates huge waves from tectonic activity which, as Casey puts it, “is not surprising when you consider that the Pacific basin, a patchwork quilt of tectonic plates grinding against one another, is an earthquake factory.”

Rose Spit, one of the northern most reaches of Haida Gwaii, is a generous place. In Haida legend, Raven found an extraordinary cockle shell there with little humans protruding from it. Raven coaxed the humans to emerge and they became the first Haida. To this day, huge quantities of weather vane scallops and cockles sometimes blow up onto Rose Spit during the winter. Word gets around and people drive out to Tow Hill to fill their truck beds with food.

Patricia Williams, who works on economic development for Old Massett Village, estimates that 60 per cent of the village depends on food fish and shell fish to survive.  “You can’t buy chicken for less than $23 bucks a pack,” she said. “You aren’t going to pull out $50 to pay for a meal every night.” So people depend on seaweed, clams and fish to get through the year. “Of course we know some people don’t get to eat like this unless they go off to the market and pay big top dollar for it,” Williams said.

Indeed. Cockles are a big, deep ribbed clam with a flavor both sweet and nutty. People who have casually harvested cockles on sea shore ambles generally become avid searchers after their first taste. According to 7 Seas Sea Foods, you can’t buy BC cockles in Vancouver. Nor can you buy weather vane scallops. Their shells, bigger than a big man’s outstretched hand, decorate the yards around Massett. The meat is the size of a small steak. Normal sized cockles sell in Vancouver for $25-30 per pound.