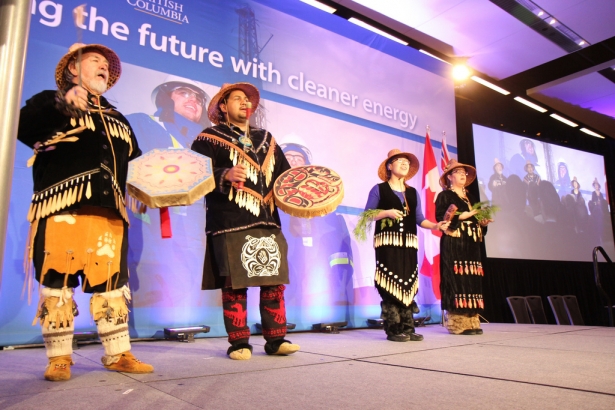 A key component to Premier Clark’s feel good message to potential LNG investors at the B.C. LNG conference Monday was the assertion that natural gas provides “a chance for us to help the world transition to the cleanest fossil fuel on the planet.”

But experts disagree. Recent studies by respected institutions have found that:

1)      Natural gas is not the cleanest fossil fuel on the planet – fugitive emissions make it is as bad for the climate as coal;

2)      Natural gas has no role as transition fuel unless there’s a global price on carbon; in fact, it will increase the world’s climate risk.

Natural gas produces as much climate pollution as coal

Natural gas’s reputation as a climate solution stems from the fact that on combustion it has the least emissions per unit of energy than any other fossil fuel. That’s only half the story. If you look at the full life cycle of the gas, you see the other half. Natural gas is methane, which is a more potent greenhouse gas than carbon dioxide prior to combustion. It’s so light that it floats out of the ground, leaking out at wells and drilling sites. If more than 2% leaks, natural gas is worse for the climate than coal.

One US study by a Cornell professor showed leakage rates ranging from 3.6% to 7.9%. That study was based on limited industry data but it gave rise to other, confirming studies based on field work. The National Oceanic and Atmospheric Administration showed 4% leakage in Colorado natural gas fields and 9% in Utah. I have not been able to find similar independent peer-reviewed studies for Canada.

A 2011 study by the US National Center for Atmospheric Research (NCAR) concluded that “Our results show that the substitution of gas for coal as an energy source results in increased rather than decreased global warming for many decades.” If it were to actually replace coal, there would be extra warming through 2050 and a minimal reduction (under 0.1 degrees C) in the 100-year time frame.

Early on, independent climate analysts shared the provincial government’s view of natural gas as a bridge fuel to a low carbon economy. But in 2011, the International Energy Agency stated that reliance on natural gas would lead the world to a 3.5 degree Celsius temperature rise because it displaces renewable energy sources.

The IEA warned of the particular danger that governments would reduce renewable subsidies and opt for gas instead at the urging of the gas companies. This is exactly what Premier Clark has done in the past week: tabled a budget that reduced renewable energy incentives by cutting the “innovative clean energy special account” by two thirds, from $14.97 million to $5.03 million and announcing a $120 million royalty credit program for the LNG industry.

“The cleanest LNG on the globe”

Premier Clark told the lunch time crowd of about 300 gas industrialists and potential investors that the provincial government was working with B.C. Hydro on supplying the power for the proposed LNG plants but had also amended the Clean Energy Act so the plants could use natural gas to feed their massive energy needs and this would ensure that reliable renewable power would be used:

"We’ve taken action with BC hydro to ensure that BC not only has the power supply to fuel the LNG industry but also to create the environmentally cleanest LNG that has ever been produced anywhere on the globe.

Discussions continue with proponents on how to best serve their needs but in order to preserve as much flexibility as possible we’ve already amended the Clean Energy Act and this has allowed discussions to take place on how best to ensure reliable renewable power can be used to meet the huge energy demand from LNG."

How does reclassifying natural gas for purposes of the Clean Energy Act ensure the use of renewable power? Premier Clark seems like she wants to ride two horses that are heading different directions.

Earlier in the morning, James Mack, Head of the British Columbia Climate Action Secretariat, stated that LNG exports would reinforce B.C.’s climate leadership role and echoed Premier Clark’s fiscally convenient belief that natural gas is part of a global energy solution. He stated that the planned export of 2 trillion cubic feet of LNG could displace 1000 coal plants – an outcome that won’t happen, according to the IEA, absent a global price on carbon.

The gas company representatives on the morning’s “Global Perspectives” panel had a singular refrain: low costs and regulatory certainty so they could make profitable investment decisions as quickly as possible. If the LNG conference is a dating game (the moderator pointed out that there are private rooms available for consummation of deals), these fellas think Canada’s pretty but, if she doesn’t have a friendly fiscal regime, they’re prepared to take their roses elsewhere – Australia, Mozambique, Russia and/or Qatar.

Premier Clark’s concluding remarks at lunch were clearly meant to reassure them:

"We intend to deliver the best environment for liquefied natural gas investment anywhere on the globe.... So let me conclude by restating the message at the heart of everything I have said today. It’s a once in a lifetime opportunity and British Columbia our government will be your steadfast partners in realizing this opportunity for your shareholders , the employees of your companies and their families and for the families of this province who depend on all of us to make sure our economy is working for them."