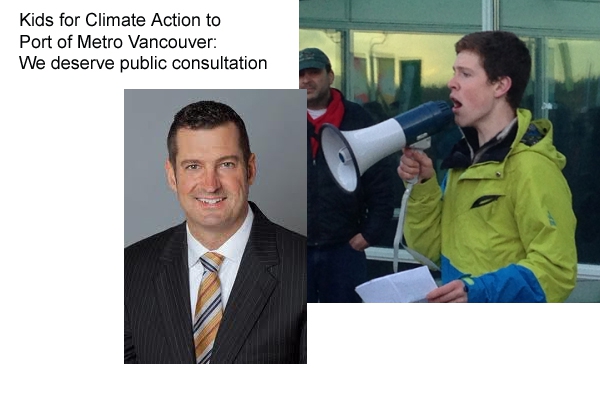 In the end, Kids for Climate Action were doubly disappointed: they didn't get a commitment for public consultation on the Surrey-Fraser coal terminal proposal and the Port broke its promise to hold a forum for debate because the industry refused to attend. "The Port cancelled because they couldn't find anyone to come defend the thing," Sam Harris said.

In February, about sixty youth from Kids for Climate Action stormed the Port of Metro Vancouver offices at Canada Place with hand-made signs, some great speeches and a bit of song and dance to oppose coal export expansion projects out of Vancouver.

The Port PR staff eventually agreed to allow seven kids (no adults) the opportunity to speak with the Vice President for Social Responsibility. After nearly an hour, high school student Sam Harrison reported back to the kids who waited outside. The Port had proposed “an event or something where they would like have people from both sides come, scientists and the public and Members of Parliament.”

Kids for Climate Action discussed whether they should be positive and appreciate the invitation to talk more, or whether the Port was manipulating their good intentions with a public relations ploy to distract them.

They decided to believe that the Port would do the right thing.

I checked in with Sam Harrison at a reception for Dr. Tzeporah Berman and asked him how the event was firming up.

"They told us the forum would occur before the decision on a new coal terminal at the Surrey Fraser docks. We agreed on the date of June 15 and had weekly meetings. Then, three weeks ago, they informed us that if the industry was not in attendance, they would cancel the event. But that wasn’t one of the conditions they had originally mentioned. And of course the industry applicant didn’t want to come. They said they were afraid it would become too adversarial.

"The Port started cancelling meetings with us because they couldn’t get anyone to come defend the projects.

"Basically, the industry is afraid to face its critics. So why would Port Metro Vancouver consider a project when the industry can’t face its own critics?

"So the port cancelled the thing because they couldn’t find anyone to defend these projects – no one was willing to come and stand in front of a room of kids to explain why the project was a good thing.

Now we’re a mixture of disappointed in them but not too surprised."

What is the lesson for Kids Against Climate Action going forward?

"Our generation deserves better and the public needs to be more involved in this process. We’re dealing with a regulator that is 'best buds' with the industry that it is regulating and we’re dealing with a regulator and an industry that can’t face the public and can’t face the people who are critical of their projects and decisions.

That should not be how it works in a democratic society. We deserve better on these decisions. It’s not the economy we want for the future and the port needs to listen to us and to the public."