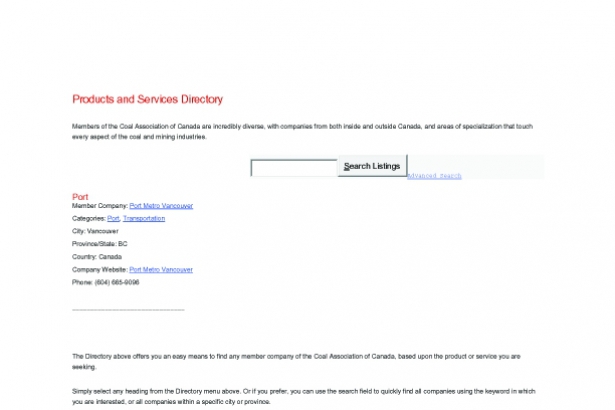 The Port of Metro Vancouver has a mandate to make independent decisions that serve a vision for long term growth and competitiveness and to provide a high level of environmental safety. But can it balance these goals and still maintain close ties to the coal industry?

The Port of Metro Vancouver (PMV) has a mandate to make independent decisions that serve a vision for long term growth and competitiveness and to provide a high level of environmental safety. But can it balance these goals and still maintain close ties to the coal industry?

PMV also belongs to the Gateway Council. The Gateway Council is an organization made up of transportation industry representatives that is dedicated to increasing trade and tourism, particularly with the Pacific Rim. The problem is that the Gateway Council is a member of the Coal Alliance, a new coal industry advocacy group of entities who “support the mining and shipping of coal in British Columbia”. The Coal Alliance of BC has attended multiple public hearings on coal issues, always in support of the construction and expansion of coal terminals for the export of U.S. coal.

The PMV’s letters patent (by which the federal government conveyed rights and responsibilities to the PMV) state that a director or officer has a conflict of interest when it accepts a role with an entity which could reasonably be expected to benefit from the business of the Port. PMV CEO Robin Silvestre is the Chair of the Gateway Council Board. Does the Gateway Council’s membership in a coal lobbying group mean a conflict of interest, real or apparent, for Silvester? The Coal Alliance certainly expects to benefit from the business of the Port. Either way, Silvester’s leadership of the Gateway Council, and the Council’s membership in the Coal Alliance, gives the appearance of bias toward accepting coal industry proposals.

The CAC’s purported mission is to create “a safe, socially responsible and economically sustainable coal industry.” It states that the more recent focus of the coal industry “has been on developing and deploying technologies to tackle greenhouse gas emissions associated with the use of coal, including carbon dioxide and methane.” It promises more information on its technology page, which no longer exists.... perhaps because there is no current technology that makes coal safe for the climate. Research on carbon capture and storage has stalled out because it is so expensive. This is why the leading world institutions give the same simple message: burning coal for electricity must stop.

In Redrawing the Energy Climate Map the International Energy Agency states that to remain under 2 degrees of temperature increase (thus limiting atmospheric greenhouse gases to 450 ppm), electricity generation from coal will have to decline to half of existing levels by 2035. That means that global production of coal must fall an average of 1.6% per year until 2035 and the industry faces a $4.2 trillion drop in cumulative gross revenues compared to current expectations through to 2035. Given the IEA’s analysis, coal port construction heads in exactly the wrong direction. In terms of economic sustainability, China is doing everything it can to end its dependence on North American coal.

In a “business as usual” scenario, extreme weather events and sea level rise will affect the transfer of goods in and around Vancouver. It seems reasonable to assume that coastal infrastructure such as ports are particularly vulnerable. In the larger picture of climate change, each decision for fossil fuel infrastructure is a step in the march toward disaster: major cities flooded, arable land transformed into deserts and oceans that are liquid dead zones. In a world with or a world without carbon restrictions, the PMV can’t credibly claim that support for the CAC and the Coal Alliance (not to mention new coal infrastructure) serves either economic or environmental goals in the long term.

Nor can PMV credibly argue that it lacks jurisdiction over the content of its exports. As Professor Kathryn Harrison pointed out in the Vancouver Sun, the Port’s letters patent authorize the Port to conduct environmental assessments without restriction. Indeed, PMV is required to uphold international agreements such as the Framework Convention on Climate Change to which Canada is signatory.

At PMV’s Annual General Meeting, Silvester noted that PMV carried out over 100 environmental assessments last year that it was not required to do. But Silvester also stated multiple times that PMV would not do any environmental assessment around the climate impacts of increased coal production facilitated by PMV’s coal export expansion decisions. He repeated that the Port concerns itself only with the sustainability of its own direct operations; the sustainability and environmental impacts from the type of cargo exported through the Port is beyond what it is willing to assess or consider. But if the type of cargo is beyond the Port’s consideration, is it consistent for the PMV to support the coal industry through membership in industry lobbying groups? Or has PMV tainted its ability to act as an independent decision-maker in the best interests of Canadians?

British Columbia set to export mega amounts of carbon dioxide. Is that a plan?